One visit to Masada is not enough.

Neither are a dozen. As many times as people go there, they always want to go back. 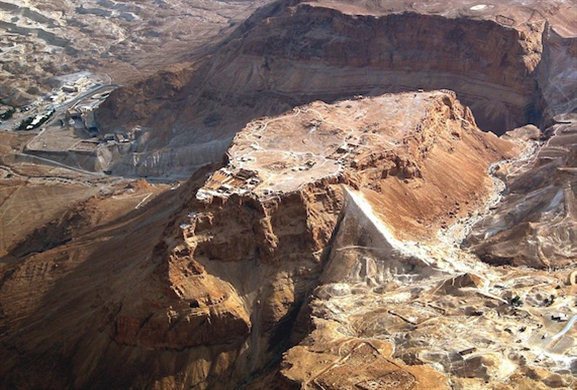 Photo: The magnificent fortress of Masada. Courtesy of BiblePlaces.com

Towering 1300 feet above the Dead Sea, Masada looks as intimidating today as it did to those who stood at its base thousands of years ago. This natural mesa looms tall across from the Lisan at the southern half of the Dead Sea.

Steep cliffs on all sides make the mountain look virtually impregnable. And it was.

Getting to the top has always come at a price. For modern visitors, that price amounts to a cable car ticket. But in antiquity, the price was a hard hike up the steep path Josephus labeled the “snake.”

In 1867, explorers rediscovered this pathway that lies along the eastern edge of Masada. For most folks, climbing the “Snake Path’’—the serpentine trail that snakes back and forth up the mountain—takes almost an hour. Going down is another story. I can testify that a person with a good set of shoes can run down the snake path in 12 minutes (especially if your group is about to leave you). 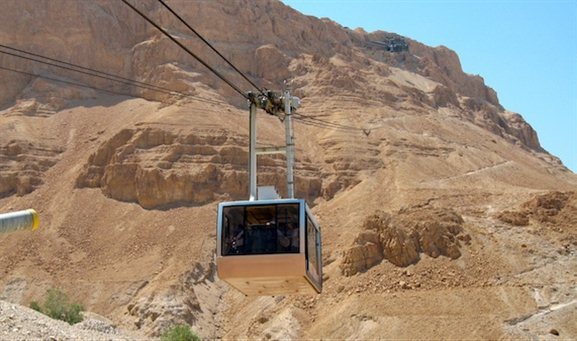 Photo: Modern visitors get to the top with a cable car. Brave souls scale the “snake path,” seen at right.

After Rome made Herod the Great king, he came to the mesa in AD 37 to fortify it, erecting an eighteen-foot high wall around its perimeter.

·         His made winter palace there, and as was true with all of Herod’s fortresses, had every comfort and convenience he could manage.

·         The palace clung to the northern cliffs of Masada like a barnacle.

·         Covered staircases gave access to three levels of terraces and portions of his beautiful mosaics are still visible.

The Final Stand against Rome

After Rome destroyed Jerusalem’s temple in AD 70, a number of Jewish patriots took refuge in Masada.

·         Led by Eliezar Ben Yair, they stood firm against Rome for several years.

·         According to Josephus, on April 15, AD 73, the Romans crested the summit to discover that almost 1000 patriots had chosen to take their own lives rather than surrender their lives and families to the cruelty of Rome (Wars 7:394-397).

·         The western side of the mesa still shows the spine of Rome’s siege ramp—an earthen incline constructed to breach the defenses of the Jewish fortress.

Some historians give serious doubt to Josephus’ fantastic account, even though it offers our only history of the patriots’ demise. His story represents what we would want to believe occurred, whether it did or not.

Masada remains a symbol of Israel’s resolve even today. Many Israeli soldiers have stood atop the mountain and uttered the oath: “Masada shall not fall again.” 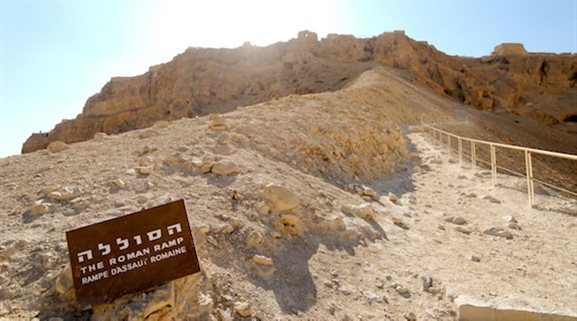 Photo: Remnants of the Roman siege ramp. Courtesy of BiblePlaces.com

The celebrated archaeologist Yigal Yadin excavated Masada between December 1963 and April 1965. (He wrote a book about it.)

·         Two expeditions identified a number of Herodian buildings, as well as bits of clothing, children’s games, writing implements, and household utensils from the time of the Jewish revolt.

·         The patriots left behind a ritual bath, or mikveh, a synagogue, food stores of corn in sealed jars, and coins dating from year five of the Jewish revolt.

Remodeled in 2007, Masada’s visitors center includes a museum that displays a number of archaeological discoveries.

·         Along with hundreds of artifacts, the museum displays a dozen potshards inscribed with Jewish names.  Some consider these the means by which Masada’s Jews drew lots before the mass suicide.

·         The center tells the story of the siege, including a wall-sized painting of hand-to-hand combat.

The renovation has paid off. Masada remains the top tourist site in Israel, grossing $10 million annually. 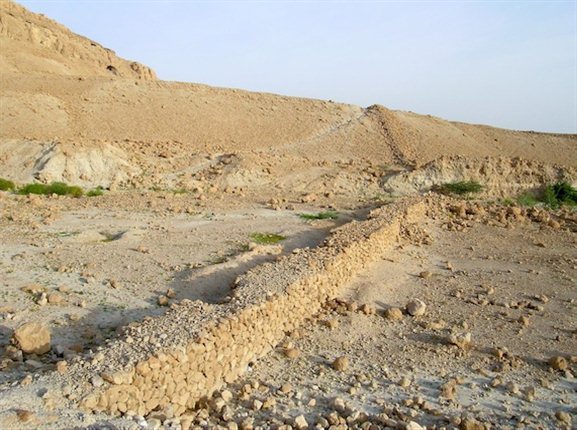 Photo courtesy of the Pictorial Library of Bible Lands (BiblePlaces.com)

Unless we take Josephus’ account literally, especially the part where Eliezer claims that God’s judgment is the cause for the Jewish defeat under Rome (Wars 7:327, 359), there isn’t a lot of biblical significance to Masada. But the one-inch painted black line across the walls of the ruins illustrates a truth we can apply. The line reveals the separation between the original ruins below the line and the reconstruction on top of it. In most cases, it’s hard to make a distinction between the original and the reconstruction. We have no visible line running down our lives to reveal the partition between the authentic and the fake. We think we can see the line in the lives of others, but it’s tough even to discern it in ourselves. How important to grant the same grace to others that we give ourselves.

During his fugitive years on the run from King Saul, David sought sanctuary for his parents across the Dead Sea in Moab. Upon returning to Israel, David took refuge in “the stronghold.” Some scholars identify this with Masada, the Hebrew term that means “stronghold” in 1 Samuel 22:4. If so, then David’s prayer for deliverance and confidence in God becomes more special—read from the top of the mesa:

“In You, O LORD, I have taken refuge; Let me never be ashamed; In Your righteousness deliver me. Incline Your ear to me, rescue me quickly; Be to me a rock of strength, A stronghold [metzuda] to save me. For You are my rock and my fortress; For Your name’s sake You will lead me and guide me.” —Psalm 31:1–3

Masada! Just hearing the word brings to mind the sounds of battle, the courage of a few, the passion of a nation, and the reminder that no place on earth is ultimately secure apart from the hand of God in our lives.