2. Caesarea Philippi (Banias)—From The God Pan To The God-Man

In a land where water is life, it’s no wonder one of the major sources of water would become a primary place of worship.

Regrettably, the god worshipped at Banias was not the God of Israel. 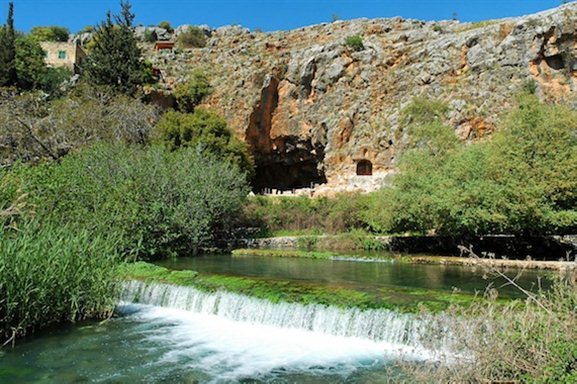 Photo: Caesarea Philippi forms the headwaters of the Jordan River. Courtesy of the Pictorial Library of Bible Lands (BiblePlaces.com).

What an absolutely beautiful area! The flowing streams and the nearby waterfalls offer some of the most pleasant and inviting surroundings for tours, holidays, and family outings.

But that’s not why Jesus came here.

The God Pan Worshipped At Banias

The melting snows at the peak of Mount Hermon seep into the ground and appear at its base. From the mouth of a large cave bubbles a cold, clear stream that helps to form the headwaters of the Jordan River. Josephus referred to the streams that flow here as the fountain of the Jordan.

Archaeology has uncovered an open-air shrine above the cave from which the water flows. Niches still visible in the side of the cliff held statues of the Greek god Pan—the mythical half man, half goat who played the panpipe. 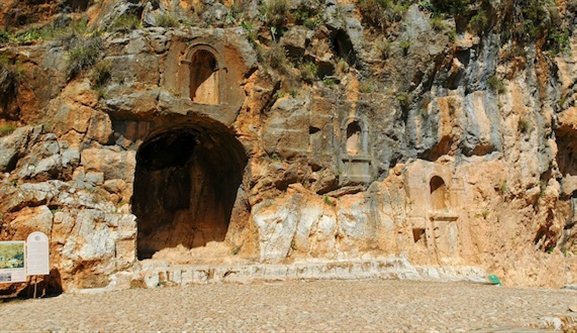 We get the word “panic” from this frightful god, and it’s no wonder why! Pan had a thirst for carnal pleasure and once chased a nymph named Syrinx who turned herself into a stand of marsh reeds (so goes the myth). So Pan made a flute from the reeds, and that’s how the panpipe got its name. It’s also why the Walt Disney character Peter Pan plays the flute.

Today, the place is known by two names for two reasons:

·         Banias. Because Arabic has no equivalent for the letter P, the name Panias (for “Pan”) has morphed into “Banias”—the name that exists today.

·         Caesarea Philippi. In 197 BC, Antiochus III overthrew the Egyptians at Banias and made way for Antiochus IV to persecute the Jews. The Maccabean Revolt followed. Having received the area from Caesar Augustus in 20 BC, Herod the Great constructed there a temple of white marble in honor of Caesar. Eighteen years later, Herod’s son Philip inherited the site and named it Caesarea. But to distinguish it from Herod’s harbor along the seacoast by the same name, Philip appended his own name to the place—Caesarea Philippi. The Crusaders used the site—along with the high vantage of nearby Nimrod’s Fortress—as an outpost to face the Sultan of Damascus. Later, the Crusaders compromised with the Muslims and divided the use of the nearby fertile plains. 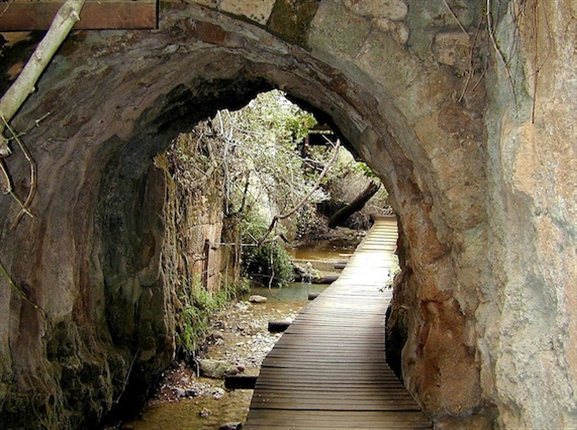 Photo from the of Pictorial Library of Bible Lands (BiblePlaces.com).

The beautifully shaded, rocky area gives shelter to rock badgers, or hyraxes, that scamper in and out of the crags. Hebrew poetry refers to these animals as wise because they seek sanctuary in a safe place (Psalm 104:18; Proverbs 30:26). But the Law of Moses calls them unclean (Leviticus 11:5; Deuteronomy 14:7)—a label more appropriate to their idolatrous surroundings.

The God-Man Asks A Question At Caesarea Philippi

Jesus brought His twelve disciples all the way up to the pagan region of Banias/Caesarea Philippi and asked them the question:

The crowds, of course, saw Jesus as nothing more than a good man, a moral teacher, whom some would even call a prophet. Jesus narrowed the question:

His disciples responded they believed He was the Messiah of God (Matthew 16:16).

A short drive to the nearby Banias Falls allows one to hike down to the river and the marvelous waterfalls. It’s likely the sons of Korah wrote Psalm 42 of these falls as they claimed faith in God in spite of the opposition all around them:

“Deep calls to deep at the sound of Your waterfalls; All Your breakers and Your waves have rolled over me. . . . As a shattering of my bones, my adversaries revile me, While they say to me all day long, “Where is your God?” Why are you in despair, O my soul? And why have you become disturbed within me? Hope in God, for I shall yet praise Him, The help of my countenance and my God.” —Psalm 42:7, 10-11

The Apostle Peter spoke for the disciples and answered Jesus’ question correctly: “You are the Christ, the Son of the Living God” (Matthew 16:16). So Jesus went on to share beyond who He was to what He would do. He would be killed and resurrected! Peter outright rejected the message of the cross, and instead opted for the promised kingdom. In the Transfiguration that followed, Jesus revealed that He is indeed the glorious Messiah—but first would come the cross.

Like Peter, the cross reveals our own expectations of life. We want glory and the good stuff of life right now. Jesus says that most of that awaits the resurrection.

When the heavy weight of the cross bears down on our shoulders, the words of the sons of Korah can refresh us:

“Why are you in despair, O my soul? And why have you become disturbed within me? Hope in God, for I shall yet praise Him, The help of my countenance and my God.” —Psalm 42:7, 10-11