3. Echoes Of Rosh Hashanah At The Place Of Trumpeting

Whenever I visit the Jerusalem Archaeological Park, I’m eager to walk to the southwest corner of the Temple Mount.

I’ve never been to this corner on Rosh Hashanah or during the Feast of Trumpets, but I’d love to go there then. Archaeologists have uncovered a large portion of the first-century street that stretched north along the original Western Wall. 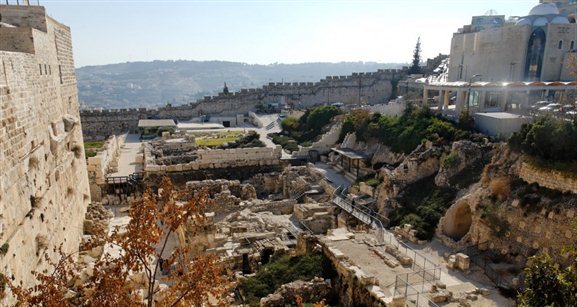 Photo: The southwest corner of the Temple Mount at left. Courtesy of the Pictorial Library of Bible Lands. (BiblePlaces.com)

One hundred meters north of the corner is the part of the Western Wall where locals and tourists pray. But beneath the ground, Jerusalem’s Central Valley has been filled in with the rubble of the Second Temple’s destruction in A.D. 70. As a result, the beautiful modern plaza stands about 30 feet above the first-century street uncovered at the southwestern corner.

There at the corner lies a reminder of something Jesus predicted 37 years before the temple’s destruction.

And of a promise He made that could be fulfilled at any moment.

The excavations near the corner of the Temple Mount came about through the generosity of a distinguished member of the Jewish Federation of Metropolitan Detroit (who also owns the Detroit Pistons). The 33-foot-wide first-century street was laid with stone slabs, some a foot thick.

Standing on the street today, it isn’t hard to imagine the Romans hurling the massive temple stones from above, literally crushing and pressing the pavement blocks into the ground.

Jesus predicted this destruction on His last visit to the temple in AD 33:

Jesus came out from the temple and was going away when His disciples came up to point out the temple buildings to Him. And He said to them, “Do you not see all these things? Truly I say to you, not one stone here will be left upon another, which will not be torn down.” —Matthew 24:1-2

Archaeologists have removed most of the rubble, but they left one pile of stones just as they found them—the street still depressed from the force of the impact. 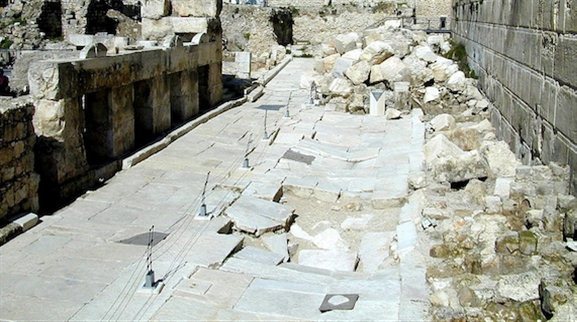 To The Place Of Trumpeting

One of the main reasons I continually return to this corner of the Temple Mount is because of one particular stone that lies on the street far below where it originally stood. Shaped as a corner, the stone bears the Hebrew inscription: “To the place of trumpeting.” The original inscription is in the Jerusalem Museum, but a replica lays where the original did.

This stone represented the pinnacle of the southwestern corner of the Temple Mount, the place where priests would stand and overlook Jerusalem as they blew trumpets to announce the Sabbath and the start of festival days. The Feast of Trumpets especially relates to this act:

“Speak to the sons of Israel, saying, ‘In the seventh month on the first of the month you shall have a rest, a reminder by blowing of trumpets, a holy convocation. You shall not do any laborious work, but you shall present an offering by fire to the LORD.’” —Leviticus 23:24-25; cf Numbers 29:1-6 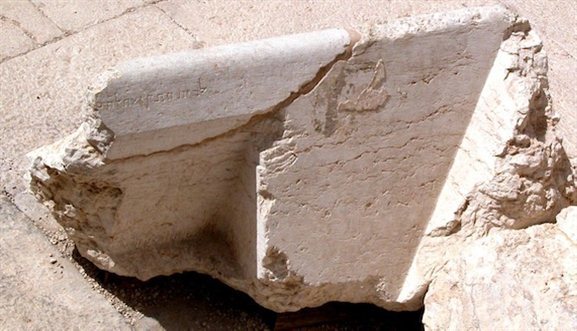 Photo: Stone with Hebrew inscription: “To the Place of Trumpeting.” Courtesy of the Pictorial Library of Bible Lands. (BiblePlaces.com)

Today, the Feast of Trumpets prepares the way for the Jewish New Year, Rosh Hashanah. The Lord originally intended the trumpets to call God’s people together in preparation for the fall festival of Yom Kippur—where the Lord would forgive sins on the basis of shed blood. “Blow the trumpet at the new moon,” Asaph wrote, “At the full moon, on our feast day” (Psalm 81:3).

Alfred Edersheim offers some helpful background on the blowing of trumpets:

“Originally the Shophar was probably a ram’s horn (Josephus, Ant. v. 5, 6), but afterwards it was also made of metal. The Shophar was chiefly used for its loud and far-sounding tones (Exodus 19:16, 19; 20:18; Isaiah 58:1). At the Feast of the New Year, one priest with a Shophar was placed between those who blew the trumpets; while on fast-days a priest with a Shophar stood on each side of them—the tones of the Shophar being prolonged beyond those of the trumpets. In the synagogues out of Jerusalem the Shophar alone was blown at the New Year [Heb. “Rosh Hashanah”], and on fast-days only trumpets.” (The Temple: Its Ministry and Services)

Devotional Thought For The Place Of Trumpeting:

Hearing the shophar echo across Jerusalem takes my mind in several directions:

·         I think of the “Place of Trumpeting” at the Temple Mount and the opening line from the song, “Yerushalaim Shel Zahav,” which says, “A shophar calls out on the Temple Mount in the Old City.”

·         I try to imagine the priests of old standing at the pinnacle of the temple, calling God’s people to worship at the High Holidays. I also think about the renewal and rededication that Rosh Hashanah necessitates.

·         I think the Lord’s promise of the Rapture, when the Lord Jesus calls His people to Himself—at any moment in fulfillment of the Feast of Trumpets.

But I especially consider the grace that the shophar’s call represents—urging worshippers to come before the Lord who forgives sins on the basis of the sacrifice God required (Leviticus 16:30). We know that ultimate sacrifice was His son, Jesus.

Rosh Hashanah and the Feast of Trumpets are great reminders that the Rapture could occur any day, and at any moment, and that our hope lies beyond this life—and not in it.