15. The Wilderness Of Judea—The Ultimate Getaway

Most historic sites in Israel have some church, or a mosque, or a settlement, or thirty feet of civilization piled on top of them. The places pilgrims come to see today show centuries of scars from the ruins and reconstructions of many faiths and peoples. 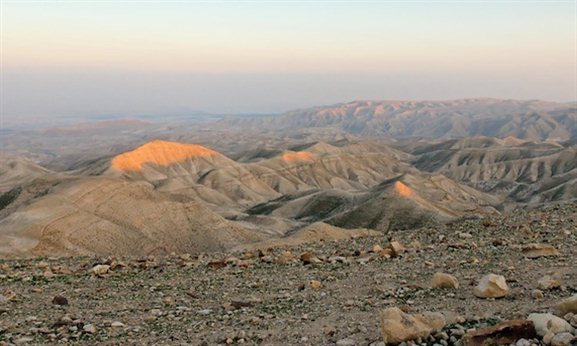 Photo: The Wilderness of Judea at sunset. Courtesy of the Pictorial Library of Bible Lands (BiblePlaces.com).

But in the Wilderness of Judea, one can see what the ancients saw. Deep ravines. Rocky terrain. Barren grades with scant vegetation. Horizontal lines cut in the hills betray generations of flocks that have worn trails like terraces in the stony slopes. Miles and miles of desolate land, interrupted only by an occasional camel, a shepherd with his flock, or a group of Bedouin tents with satellite dishes.

Bleak, inhospitable, stark, and harsh—the Wilderness of Judea has sat virtually unchanged for thousands of years.

It was the perfect place to escape.

A Dry And Weary Land

In the wilderness wanderings under Moses, the Hebrews learned to trust God for water, because the places of their journey offered very, very little of it. Those four decades of thirsty travel provided the training ground for living in the Promised Land—a land that also had no abundant sources of natural water—“a land of hills and valleys [that] drinks water from the rain of heaven” (Deuteronomy 11:11).

The rainfall in Israel—both in antiquity, as well as today—falls mostly west of the hill country’s watershed.

·         The further north and west one goes in the land, the more precipitation occurs. The Wilderness of Judea misses on both counts, lying south in the country and east of the watershed.

·         A rain shadow dominates the chalky wasteland of the wilderness. This is the “dry and weary land,” as David scribbled three thousand years ago, “where there is no water” (Psalm 63:1). 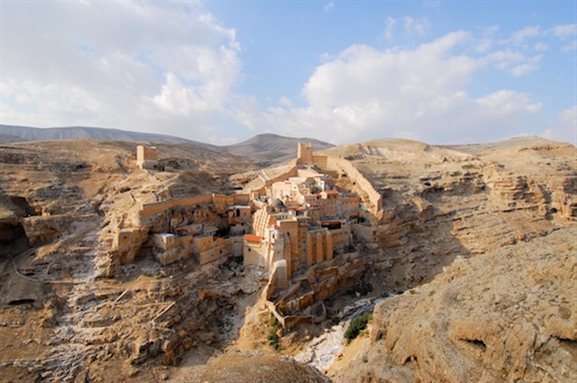 David knew this wilderness well, especially in the years before he became king. Just as the wilderness wanderings of his ancestors prepared them for the land, so the Wilderness of Judea served as David’s preparation for his kingdom.

·         Here the young shepherd wrote his most famous song—comparing the tracks of his flocks to God’s “paths of righteousness.”

·         In later years when David fled from King Saul, the future king of Israel would hide in the wastelands of Ziph, Maon, and En Gedi—all portions of the Wilderness of Judea.

A Place Of Escape And Seclusion

Because the Wilderness of Judea remained so arid and uninviting, most people only passed through it on their way to somewhere else. Because nobody wanted to go there, often only the “nobodies” of society did. The wilderness attracted those on the fringes—outcasts, shepherds, fugitives, hermits, and even fearful rulers.

·         The paranoid Herod the Great built fortifications in this general area at Cypros, Dok, Herodium, Hyrcania, Masada, and Macherus.

·         Here John the Baptist announced the coming of the Lord in fulfillment of Isaiah’s prophecy of a “voice crying in the wilderness” (Isaiah 40:3; Matthew 3:1).

·         Jesus retreated to this wilderness to fast and face temptation for more than forty days (Matthew 4:1).

·         After the death of their brother Judas Maccabeus, Jonathan and Simon centered their insurgency near Tekoa in the Wilderness of Judea (1 Maccabees 9:33).

Undoubtedly the most unique inhabitants of this land were the thousands of Christian monks who flooded the area and formed monasteries—the ultimate getaway. In the Byzantine period between the sixth- and fifth-centuries, the Wilderness of Judea hosted more than sixty-five monasteries all connected by a network of trails.

Today, visitors to the wilderness can travel to see Mar Saba east of Bethlehem, the only monastery that boasts a continual occupation since its origin. The easiest monastery to see is Saint George’s. Its blue domes and white arches dot the colorless canvas of the wilderness and cling like a barnacle to the northern face of the Wadi Qelt’s cliffs. Housing one of the oldest monastic communities in Israel, the monastery has been inhabited since the fifth century and gives a vivid illustration of monastic life. The ultimate getaway is today a tourist attraction.

One of the best places to stand and observe the Wilderness of Judea is near Saint George’s Monastery. At the top of a nearby overlook, a covered observation point allows visitors a long view across the vast, unspoiled wilderness. Here, it isn’t hard to go back in time.

Very few places in the Holy Land can one travel and still see the terrain as it appeared for thousands of years—and likely, how it will stay for many more.

Devotional Thought For The Wilderness Of Judea

When a king or dignitary would visit a foreign land, he would often send an envoy ahead to fill the potholes, remove the rocks, and flatten any part of the road that might make the journey uncomfortable. We could compare it today to “rolling out the red carpet.”

All four Gospels point to John the Baptist as the “voice crying in the wilderness,” in fulfillment of Isaiah’s prophecy on one who would prepare the way for the Messiah (Isaiah 40:3). In preparing the way for Israel’s King, John used the rough hills and rocky valleys of the Wilderness of Judea as a metaphor for the hard hearts of the people. Imagine trying to prepare a highway through the Judean Wilderness!

“Every ravine will be filled, and every mountain and hill will be brought low; the crooked will become straight, and the rough roads smooth.” —Luke 3:5

John’s command to “repent” meant to change one’s mind about following God. It forced the people who walked in the Wilderness of Judea to consider the spiritual lives with every ditch they avoided and every rock they stepped over. What would Jesus have to walk around in our lives if He were to come today?