14. The Southern Steps And Psalms Of Ascent Reminders

Who would have ever thought to use stairs as a memory-trigger?

At the southern edge of Jerusalem’s Temple Mount, a 200-foot wide flight of stairs represents both original and restored steps from the Second Temple period. 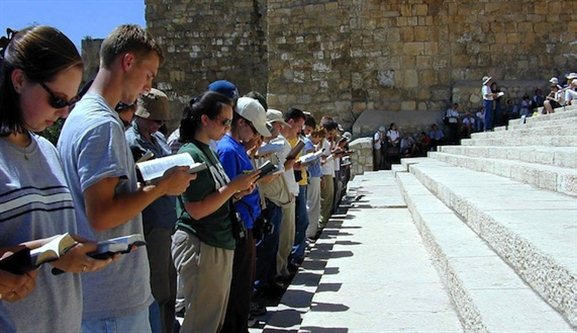 Photo: Reading the Psalms of Ascent on the Southern Steps. Courtesy of the Pictorial Library of Bible Lands. (BiblePlaces.com)

Millions of sandals (including Jesus’) shuffled up these steps in antiquity as Jewish pilgrims came from all Israel and the Diaspora to worship the Lord for the annual feasts.

Some suggest the pilgrims sang the Psalms of Ascent on these steps. If so, the place brought to mind critical themes.

The place echoes of our need to be reminded of what we already know.

The Southern Steps Excavations At The Temple Mount

Few places in Jerusalem give the sense of the Second Temple period like the Southern Steps excavations at the Jerusalem Archaeological Park.

In fact, because excavation on the Temple Mount itself is prohibited, this area immediately south of the mount offers important archaeology to help unpack the history of the Temple Mount during the first century.

·         Since the 1990s, archeological excavations have progressed under Ronny Reich.

·         The recent discovery of the First-Temple period Ophel (mentioned in 2 Chronicles 27:3; 33:14) has been opened to the public. The Ophel excavations began in 1975 and were recently renewed.

At the top of the Southern Steps, at the far east of the stairway, stands a triple gate—today closed with stones.

·         This gate, called the Huldah Gate, served as a primary entrance into a subterranean tunnel that ascended into the Temple Courts.

·         At the far west of the broad staircase, a double gate stood—today only a portion of this gate and its lintel can been seen. This gate represented an exit, and the stairway below it—with their alternating wide and narrow steps—offered a place for teaching, for visiting, or for a simple descent. 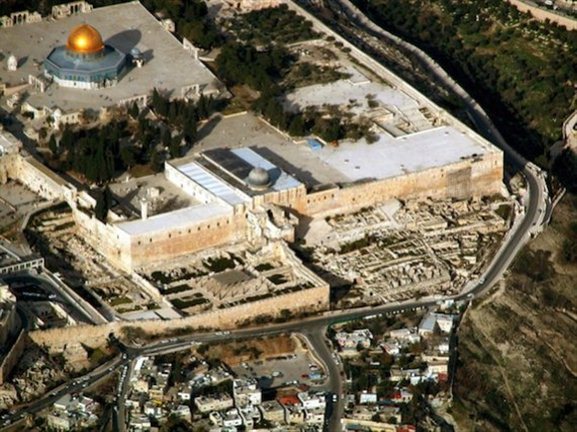 Photo: Courtesy of the Pictorial Library of Bible Lands. (BiblePlaces.com)

The Psalms Of Ascent As Reminders

Three times a year worshippers would enter the Temple from these steps, after a customary cleansing in the nearby ritual baths, or mikvot.

God required these pilgrimages, as written by the hand of Moses:

Over the years, a songbook developed that served as the pilgrims’ traveling songs. Psalms 120-134 all bear the superscription, “A Psalm of Ascents.” These are the songs the Jews sang as they ascended to Jerusalem every year for their feasts.

·         Some propose that these fifteen psalms were sung on the fifteen wide steps we see today in the Southern Steps excavations.

·         A popular activity for tourists often includes reading each psalm—or the first verse of each psalm—on each wide step, moving up two steps to the next wide step for each successive reading.

However, the Mishnah notes that these fifteen psalms were sung by the priests who stood not on the Southern Steps, but on the fifteen steps from the Court of the Women ascending to the Court of Israel:

“On the fifteen steps which led into the women’s court, corresponding with the fifteen songs of degrees, stood the Levites, with their musical instruments, and sang.” — m. Sukkah 5:4-5

Devotional Thought For The Southern Steps

Think about Christmas carols and patriotic songs like, “God Bless America.” Sung on holidays, these tunes are familiar to all and stir up critical reminders of basic life themes.

The first-century Jewish culture recognized the necessity of reminders and repetition—the need of rehearsing truth when the world around them countered God’s Word at every step. The Psalms of Ascent that the pilgrims of old would recite from memory several times a years served as reminders of faith, forgiveness, family, children, peace, hope, brotherhood, sacrifice, and right attitudes toward God and people.

What was true then remains true for us:

Without simple reminders, we would forget essential truths. (Tweet that.)