16. The Wilderness Of Zin— Inspiring Awe But Not Obedience To God

I thought I understood the wilderness wanderings of Israel.

Then I traveled through the wilderness. On my summer visits there, I never had to check the forecast. It only fluctuated from blistering to broiling.

After a searing hike through this wilderness, a traveling companion of mine boarded the bus, his shirt sweat-soaked. He collapsed in his seat, and someone asked him if he now understood why the Hebrews grumbled and failed in obedience to God.

He took a long gulp from his canteen and then blurted, “I’m with them!”

After the exodus from Egypt, the Lord led the new nation of Israel to Sinai to receive the Law. Eventually, they made their way to Kadesh Barnea, a place bordering the Wilderness of Paran in the Sinai Peninsula and the Wilderness of Zin in the Negev Highlands (Numbers 13:21, 26).

Because of their lack of faith and obedience to God, the Hebrews would turn an about-face and wander in the wilderness for a total of forty years—one year for every day the explorers surveyed the land (Numbers 14:34).

The most beautiful parts of the Negev Highlands are the makhteshim—a term Israel contributed to geology. These types of craters exist only in Israel. A makhteshim occurs when erosion from a single waterway creates a valley with sheer cliffs, or anticlines, that enclose the crater on all sides—creating a bowl.

In fact, the term makhtesh means, “mortar,” like a “bowl.” For that reason, some call the Makhtesh Ramon the “Super Bowl” of Israel. I have to agree. 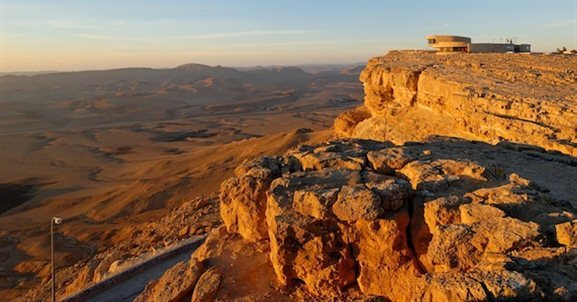 The largest of three makhteshim in the Negev, the Makhtesh Ramon sits as one of the biggest craters on earth. Twenty-five miles long, five miles wide, and plunging as deep as 1300 feet. How did the massive crater form? Its elongated shape eliminates the possibility of an asteroid collision. Most scientists believe that the crater reveals the erosion of the central Negev mountains, perhaps also including underground earthquakes.

To me, it looked more like God punctured the surface of the land with his finger. Maybe He did this instead of smashing the Israelites who wandered nearby.

Gypsum, Geology, And The Grand Canyon Of Israel

Viewing the Makhtesh Ramon from the Mitzpeh Ramon Observatory on the western rim allows the viewer to see the whole picture. Some call it the “Grand Canyon of Israel.” Every time I’ve stood there, an ibex has meandered into the scene. The Makhtesh effectively offers an open-air museum of volcanic rock, variegated clays, rough hunks of quartzite, and massive blocks, upended and bare—a geologist’s playground.

The area represents the largest national park in Israel. Mere photography fails to do it justice.

The highway that clings to the walls of the great crater transports tourists today. But in antiquity, a road crossed the makhtesh for commercial purposes from the Nabatean city of Petra.

·         Spices—especially the fragrant gum resins, myrrh and frankincense—made the highway a lucrative route.

·         The historian, Pliny, described the road as having sixty-five camel stops between Timna and the Mediterranean Sea.

Today, the mountains of Makhtesh Ramon surrender gypsum to commercial production—thousands of tons annually. In the middle of the crater, a factory works the gypsum into a component suitable for plaster of Paris and cement. Smaller mining efforts cull clay and quartz from Makhtesh Ramon.

Devotional Thought For The Wilderness Of Zin

The Wilderness of Zin witnessed the Hebrews’ failure in their obedience to God. Here even the insubordination of Moses occurred. And the result? They didn’t enter the land. The implications of their example linger.

·         Faith is more than a creed—it is a way of life in obedience to God. For the Hebrews who spied out the land, and those who failed to believe God could give them what He promised, they never got to enter the land.

·         For Moses and Aaron who led the people but failed to honor God before them, they never got to enter the land.

This doesn’t mean, of course, that we who love the Lord, but fail in our obedience to God, will not go to heaven. It does mean that—for both those who lead and those who follow—there may be a loss of privilege. Some of the blessings the Lord intends for us to enjoy come only by believing and obeying Him against impossible odds.