10. The Dead Sea Will Live Again

If bodies of water could be ghost towns, the Dead Sea would top the list. It’s the lowest place on earth, it’s the hottest spot in Israel, and nothing visible can live in its waters. 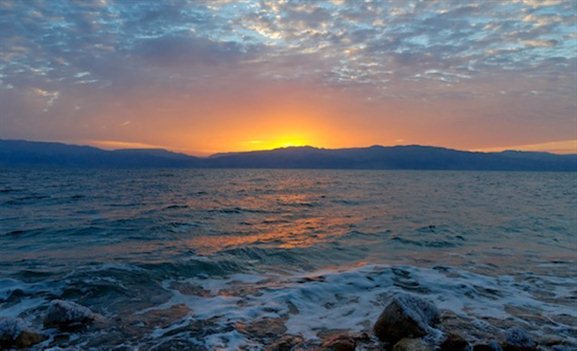 With a name like the “Dead Sea,” one might expect a disappointing visit. And yet, anyone who experiences the place never forgets its wonder.

Nothing on earth compares.

You Can’t Sink On The Dead Sea

While tourists may purchase some facial creams and hand lotions, most come to the Dead Sea to experience its reputation for a remarkable buoyancy.

·         The Dead Sea’s salinity is so dense that I literally could stand still without touching bottom and float with the surface of the water at my chest—a really strange sensation!

·         Many who float on their backs can easily read a book. Throw a stick on the surface, and it appears to be lying on a mirror.

·         The historian Josephus records that when Vespasian came to the Dead Sea during the Jewish Revolt in AD 68, he decided to test the reputation that it is impossible for someone to sink. Vespasian tied up some people who couldn’t swim and tossed them in the water! (Why tie them if they couldn’t swim?)

·         That story offers a good reminder for swimmers (and non-swimmers) to avoid water in the eyes and mouth—unless one enjoys weeping and vomiting. I’m told that water in the lungs likely will prove fatal. (You think?)

Those commonsense warnings observed, the Dead Sea rewards each visitor with an unforgettable experience—including really oily skin. Wading into the brackish water, many swimmers scoop handfuls of black mud and slather it on their bodies for a photograph. 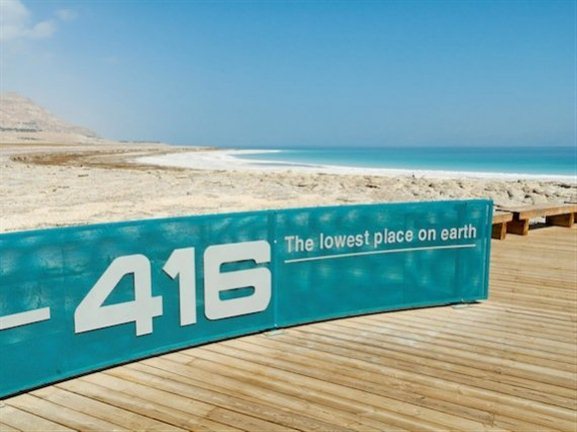 The Dead Sea’s Blessing And Curse—Evaporation

A mosaic on the floor of a church in Medeba, Jordan, represents an early tourist map for Byzantine pilgrims on their way to the Holy Land.

·         The map shows fish swimming down the Jordan River and then turning around once they hit the Dead Sea!

·         As the Jordan River snakes its descent from the base of Mount Hermon, it ultimately empties its flow just south of Jericho into brackish waters.

Today, most of the Jordan River is diverted for domestic and agricultural interests. But what does still flow delivers the Dead Sea its only continuous intake to replenish what water evaporates.

·         With dimensions measuring forty-five miles long by eleven miles wide, the sea evaporates millions of tons of water each day. Its dimensions have changed significantly in history.

·         The unstable water level of the Dead Sea keeps both Israel and Jordan working to solve numerous problems—suggested solutions ranging from relocating hotels to pumping water north from the Red Sea.

·         The evaporation leaves behind concentrated calcium, magnesium, potassium, and sodium chlorides, giving the Dead Sea the highest salinity of any body of water on earth.

·         The Nabataens in the fourth-century BC exemplify some of the many in history who have harvested the minerals for commercial purposes. Even today, the Dead Sea’s minerals remain big business. The worldwide demand for products keeps the more than 1500 employees of the Dead Sea Works Ltd. working around the clock.

Devotional Thought On The Dead Sea

The Dead Sea has had many names throughout history. The Scriptures refer to it as the “Salt Sea” (Numbers 34:3), the “Sea” (Ezekiel 47:8), and the “Eastern Sea” (Joel 2:20). Other designations in history include the “Sea of Asphalt,” the “Stinking Sea, and the “Devil’s Sea.”

It may seem hard to believe, but the region used to be a well-watered area—as lush and attractive as the Garden of Eden. But God’s judgment on Sodom and Gomorrah changed the area’s fertility to a desolate expanse that represented judgment on sin (Genesis 13:10; Deuteronomy 29:23; Jeremiah 17:6). The evaporation hovering over the Dead Sea gives a constant haze over its surface. It reminds me of the furnace-like smoke that rose from the valley after the destruction of Sodom (Genesis 19:28).

Today, the Dead Sea represents the remnants of God’s judgment on sin. But one day, Scripture promises, the Dead Sea will live again. When Jesus rules the earth in the Millennial Kingdom, water will flow from Jerusalem’s Temple Mount and fishermen will line the banks of the Dead Sea (Ezekiel 47:8-11; Zechariah 14:8).

What the Lord will do for the Dead Sea in that day, He can do for you today. What a picture of the power of God to bring life from death.

I wonder what we’ll call the Dead Sea in that day?