14. Chronology Of The Monarchal Period

We cannot begin to speak of absolute chronology until we come to this period, that is, it is only here that we can begin to synchronize the events of the various countries of the Middle East. The framework of a chronology for this period is four dates synchronized with extra-biblical data.1

This date is based on the synchronism in Josephus, Antiquities, VIII, #62ff. He there relates Solomon’s fourth year and Hiram.2

Shalmaneser III of Assyria mentions Ahab in the battle of Qarqar (853) and Jehu (on the black obelisk) as paying tribute in 842/41. Since Jehoram and Ahaziah are given twelve years in the Bible, Ahab must have died in 853 (but not at Qarqar, see the biblical account in 1 Kings 22), and Jehu have taken the throne in 842/41. This is the most corroborated date in the chronology of this period.3

This date is derived from the annals of Sargon II.4

The First Capture of Jerusalem—597 B.C.

Some Problems in the chronology.

The first main problem to be wrestled with is the method used in reckoning the date of the accession of the king to the throne. During the era of the kingdom, there were two systems in current use. One was the accession or postdating method. This dictated beginning the reign on the first day of the following year. The other was non-accession or ante-accession. Of the two, the former is the more accurate for determining the actual period of the reign. Thus it may be seen that as much as a whole year’s difference may result in the synchronizing of two kings reigning simultaneously.

The Jews employed two years in their calendar: the religious and the civil. The religious year began in March/April and the civil in September/ October. The second problem arises in trying to determine the year the king used for dating his reign. Thiele has adopted the system of giving both years, i.e., 931/30.

Finally, the most elusive problem is that there were several co-regencies among the kings. This must be determined by a process of elimination. Finding a ten-year excess from the time of Hezekiah to the captivity, for instance, Thiele shows that Manasseh is the only likely king to have had coregency. Since Hezekiah was given fifteen years to live, it is only logical to conclude that he began to train his son for the throne. The period of training was included in Manasseh’s fifty-five years total reign.

The Assyrians had an interesting way of computing dates called the eponymic cycle (epi—upon, onoma—name). On the first day of each year, a man was appointed to an office, and the year was named after him. A fairly complete list of these names has been found engraved on a wall. Elsewhere, in the city of Khorsabad, a more complete list has been found which was copied from the former list. To further supplement this, Ptolemy, an Alexandrian astronomer, developed a canon of kings based upon the movement of the heavens. It is from this that we are able to arrive at a relatively absolute date, compare that with the few dates given in the Assyrian king list, and come up with a very definite date with which to work. Thus, when Shalmaneser III says that he came up against a coalition of kings, including Ahab of Israel, we are able to give that as the last year of Ahab’s reign or 853 B.C. (see Freedman and the accompanying chart). For details, see CAH 1,2:740ff.

The period of the judges is a computation of biblical data (cf. also Josephus). The dates of the kings and the information concerning them is based on Thiele, The Mysterious Numbers of the Hebrew Kings. The Assyrian dates are from E. G. Campbell, BANE, (some discrepancies will be noted between different sources). The exile and restoration are from ISBE (supplemented from BANE). See also, Albright, SATC; Freedman, “Old Testament Chronology,” BANE; and the chart at the back of D. W. Thomas, AOTS. 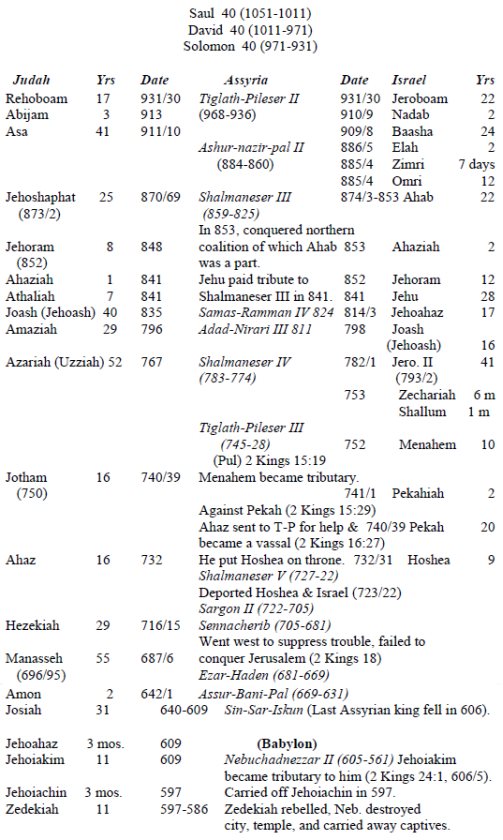 2Loeb series on Josephus has this editorial note: “Justinius, in his Epitome of Trogus Pompeius, xviii, 3.5, says that Tyre was founded a year before the fall of Troy. This, in turn, is dated by the Parian Marble…in the year comparable to 1209/8 B.C.”