Israel’s greatest height was reached around the beginning of the first millennium B.C. Under David and Solomon, Israel became a prominent power in the Middle East. This was the heroic age in Greece (Homer). Rome was founded about 700 B.C.

The Rule of Saul

Saul’s greatest service was in beginning to thrust out of the Philistines. Iron comes of age in Israel (cf. 1 Chron. 22:3. David prepared iron nails), and since the Philistines controlled the industry, they had a great advantage over Israel. Gibea was Saul’s home. Excavation shows that it was destroyed, probably with the internecine warfare with Benjamin. Saul built his “palace” on these ruins. It was about 169 feet by 114 feet. It was rural, simple, and two-story.

David had a personal army which was a foreign contingent. These were Pelethites and Cherethites (Philistines and Cretans?) and 600 warriors from Gath under Ittai (2 Sam. 15:18).

He conquered Beth-Shan (an old Egyptian outpost), Jerusalem, and then the Philistines, Moabites, Ammonites, Edomites, and finally the Syrians (since the Syrians were beginning to make incursions into Assyria, David may have prevented the fall of the latter). This left Israel the strongest state between the Euphrates and Egypt.

DeVaux has shown that this was probably patterned after the Egyptian system.

Not a single discovery has been made in Jerusalem from the time of David and Solomon. Apparently, the city was dug off as in Hasmonean times and thrown over the hill. Excavation by Miss Kenyon has uncovered part of the Jebusite wall. After the 1967 war, the Israelis were able to excavate in the Jewish Quarter with marvelous results.3

Some of the walls of this tell (identified with Sha’araim) have stones that are estimated to weigh from 3-5 tons. A project this massive would require a central authority with enough resources to carry it out. This is another argument for a Davidic kingdom.

“The discovery of an ostracon in the stratum of Iron Age IIA at Khirbet Qeyafa (Sha’araym) at the north-western end of the Terebinth Valley is very important for dating paleography in South Canaan, but also for its content, once completely deciphered. It is the earliest witness of the institution of the monarchy by the people in Ancient Israel.”4

This ostracon may contain the oldest Hebrew inscription extant. There is some debate about the partial inscription.5 Puech provides the following proposal:

Do not oppress, and serve God : | : The cheater

The judge and the weeping widow; he has power
over the resident stranger and over the child, he cuts them off together.

The men and the heads/officers have set up a king.

He marked [sixty] servants among the communities/habitations/generations.6

Solomon’s reign provided glamour to the kingdom.7 He carried on extensive commercial activity. First Kings 10:8-9 records that he bought horses and chariots from Cilicia and sold them to the Arameans. He controlled the Arabian trade by Ezion Geber (1 Kings 9:26; 20:22). He was a copper and iron baron. The bath (bronze sea) must have weighed 25 to 30 tons.

Northern Israel was divided into administrative districts (1 Kgs. 4:7ff--store cities). David may already have organized the south. Megiddo had stables for 400 horses8 and Hazor was fortified for northern protection.

Glueck has repudiated his identification of this site as the great smelting plant (The Other Side of the Jordan; repudiated in AOTS).

There would have been some influence on the temple by the artisans of Tyre and Sidon. Consequently, modern models of the temple differ radically from the older ones.

Prosperity brought decadence. Through political alliances, Solomon acquired a large harem with all the attendant problems, not the least of which was the introduction and sanctioning of other religions.

For a summary of cities excavated during this time, see, 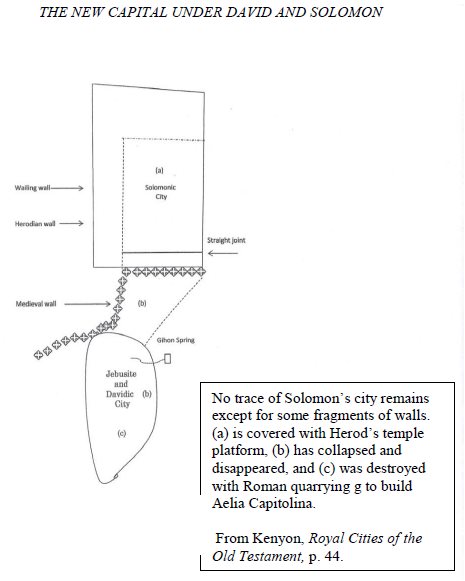 1This discussion is based on Wright, BA.

2R. DeVaux, The Bible and the Ancient Near East.

8Cf. the archaeological work done in both places in Wright, BA. Yadin discusses subsequent work at Megiddo in “In Defense of Stables at Megiddo,” BAR 2:3 (1976). He concludes that the stables belong perhaps to Ahab’s time. Megiddo is going to be revisited (I. Finkelstein and D. Ussishkin, “Back to Megiddo,” BAR 20 [1993] 26-43), and G. I. Davies (“King Solomon’s Stables Still at Megiddo?” BAR 20 [1993] 45-49) believes (after studying the original reports again) that an earlier stratum will reveal Solomon’s stables.