“For we have all received from his fullness one gracious gift after another. For the law was given through Moses, but grace and truth came about through Jesus Christ.” (John 1:16-17)

You heard the good news of the gospel and believed that Jesus is the Christ, the Son of God who gave himself for your sins so that you could have eternal life just by believing in him—the Savior. But more than salvation, Jesus Christ calls you into a relationship with himself! Christianity is Christ! It is not a lifestyle, rules of conduct, or a society whose members were initiated by the sprinkling or covering of water. Christ calls us into a close relationship with him as brothers and friends.

Yet, he is also our Lord, the one who sits at the right hand of his Father God as head over everything else in heaven and on earth (Ephesians 1:20-22). As Lord, Jesus Christ is our master—the one to whom we should willingly give our obedience. He is our model of how to live as humans in a dependent relationship with God, and he is our mentor in walking with us in that dependent relationship. Jesus Christ calls us to a new life, clothes us with himself, commissions us with a purpose, and empowers us to fulfill that purpose.

Jesus Christ commanded his disciples to make disciples—the very ones who watched him make disciples of them. They saw him do it! They knew what he was commissioning them to do. They experienced that relationship with him that changed their own lives. So, they were willing to bring that experience to the lost, hurting, hopeless populace in their neighborhoods, cities, and destinations. They brought good news that was real, relevant, and life-giving.

Jesus’ disciples 2000 years ago were no different than we are except they physically beheld the risen Christ. We must see him through eyes of faith and allow the gospels to leap off the page revealing our Lord so that we may know this God-man who changed our lives as we received the Good News—Christ. We need to frequently read the Gospels, watch movies based on them, and tell the stories about Jesus as often as needed to know his life well because…Christianity is Christ! Let’s get to know this Christ who is the ultimate grace gift to us.

The claims of Jesus Christ

According to the Bible, God chose to reveal himself to the nation of Israel and, through Israel, to the world. Many truths about God (“attributes”) are taught in the Old Testament. Our God is:

If there is anything clearly and relentlessly asserted about God in the Hebrew Scriptures, it is that there is only one true and living God. The Jewish statement of faith is from Deuteronomy 6:4-5:

“Listen, Israel: The Lord is our God, the Lord is one! You must love the Lord your God with your whole mind, your whole being, and all your strength.”

God desires man to worship him alone (Isaiah 42:8; 43:10-13). Jesus of Nazareth appeared and issued his challenge within this most monotheistic of cultures. When he came on the scene, Jesus called people to a spiritual relationship with himself and God the Father (John 17:3; Matthew 11:28-30). He claimed to be the answer to the needs of the human heart. Of all the world’s religions, Jesus is the only “founder” who claimed to be equal with God. Let’s see what the scripture says about who Jesus Christ is.

1. Notice what Jesus claims about himself in each of the following sections of John 5:16-47.

2. Christ made claim to divine rights and authority. What right or authority does Jesus claim in the following passages?

Think About It: Was Jesus just a great religious teacher? “A man who was merely a man and said the sort of things Jesus said would not be a great moral teacher. He would either be a lunatic—on the level with a man who says he is a poached egg—or else he would be the Devil of Hell. You must make your choice. Either this man was, and is, the Son of God: or else a madman or something worse ...You can shut him up for a fool, you can spit at him and kill him as a demon; or you can fall at His feet and call him Lord and God. But let us not come up with any patronizing nonsense about His being a great human teacher. He has not left that open to us. He did not intend to.” (C. S. Lewis, Mere Christianity, pages 54-55)

Jesus Christ claimed to possess a unique relationship with God the Father, a unique authority from the Father, and to be the center and goal of the Hebrew Scriptures. He accepted worship, claimed the authority to forgive sins and pronounce judgment, demonstrated authority over demonic powers and claimed the ability to answer prayer.

Scriptural Insight: The innocence of Jesus—Though Jesus was executed by Rome as a state criminal (the meaning of crucifixion), his innocence was repeatedly confirmed by others: Pontius Pilate (Luke 23:4,13-15,22), King Herod Antipas (Luke 23:8-12,15), a crucified criminal (Luke 23:41), and a Roman centurion (Luke 23:47).

6. Deeper Discoveries (optional): The coming of Jesus Christ into human history was not an event that suddenly burst upon an unsuspecting world. It was the fulfillment of a long line of prophecies that started with the beginning of human history in Genesis 3:15. The arrival of Jesus in human form was planned before the creation of the world (1 Peter 1:20) as well as the mission he was sent to accomplish (2 Corinthians 5:18-20—reconciling the world to God.

7. Graceful Living: Read Matthew 16:13-16. Notice the question Jesus asked his disciples. This is the world's most important question: "Who do you say Jesus is?" Evaluate the diagram below for your options then declare your response. 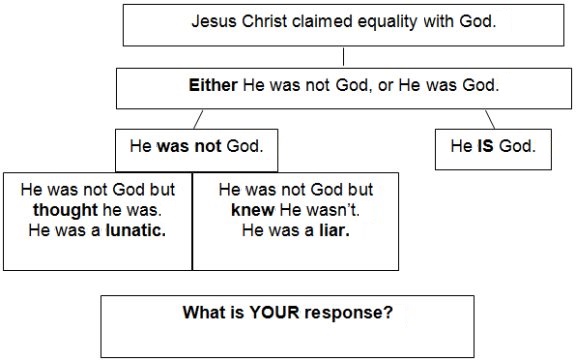 What others claimed about Christ

8. Read the following passages to answer the question, “What claims do the New Testament writers make about Jesus Christ?”

9. The New Testament writers are consistent in their claims about Jesus. What would you conclude about these writers if they knew that he was not God and yet claimed that he was?

Historical Insight: A Historian’s View of the Resurrection—”There were, to be sure, ways of coping with the death of a teacher, or even a leader. The picture of Socrates was available, in the wider world, as a model of unjust death nobly borne .The category of ‘martyr’ was available, within Judaism, for someone who stood up to pagans, and compromising no-better-than-pagans, and died still loyal to YHWH (the Hebrew name for God). The category of failed but still revered Messiah, however, did not exist. A Messiah who died at the hands of the pagans, instead of winning YHWH’s battle against them, was a deceiver…Why then did people go on talking about Jesus of Nazareth, except as a remarkable but tragic memory? The obvious answer is the one given by all early Christians actually known to us (as opposed to those invented by modern mythographers). Jesus was raised from the dead.... The resurrection, however we understand it, was the only reason why his life and words possessed any relevance two weeks, let alone two millennia, after his death.” (N.T. Wright, Jesus and the Victory of God: Christian Origins and the Question of God, Volume 2)

From the beginning, the church has maintained that Jesus Christ, crucified and risen from the dead, is Savior and Lord of heaven and earth. Apart from his resurrection from the dead, historians have no feasible theory for the birth and progress of the Church.

12. Graceful Living: Do you believe that Jesus was raised from the dead according to the eyewitnesses who claimed this truth? How does your faith about this truth influence your life?

Scriptural Insight: “The Christian church rests on the resurrection of its Founder. Without this fact the church could never have been born, or if born, it would soon have died a natural death. The miracle of the resurrection and the existence of Christianity are so closely connected that they must stand or fall together. If Christ was raised from the dead, then all his other miracles are sure, and our faith is impregnable; if he was not raised, he died in vain, and our faith is vain. It was only his resurrection that made his death available for our atonement, justification, and salvation; without the resurrection, his death would be the grave of our hopes; we should be still unredeemed and under the power of our sins. A gospel of a dead Saviour would be a contradiction and wretched delusion.” (Philip Schaff, History of the Christian Church, Volume 1, page 172)

The God you can know

A relationship with God must be based on a true knowledge of the God who is (John 4:20-24; 17:3). The Bible teaches that man can know truth about God (1 Thessalonians 1:9-10). God has revealed himself as tri-personal:

Think About It: Jesus is our savior and our ultimate grace gift from God!

Think About It: “Today, all sorts of subjects are eagerly pursued; but the knowledge of God is neglected…Yet to know God is man’s chief end, and justifies his existence. Even if a hundred lives were ours, this one aim would be sufficient for them all.” (John Calvin)

15. Graceful Living: You can have a personal relationship with God through faith in his Son Jesus Christ. Describe the significance of that relationship to you through words (prose, prayer, poem) or any other means (song, art, craft).