From the series: Jesus, Lover of a Woman’s Soul PREVIOUS PAGE | NEXT PAGE

What Happened Since the Time of Esther?

During the exile from her homeland, Israel was cut off from the temple, divested of nationhood and surrounded by pagan religious practices. So, the Jews concentrated on what they had retained—the Law (the first five books of the Bible, also known as the Pentateuch or the Torah) and the belief that they were God's people—rather than on the nationhood they had lost. This found its expression through personal piety and prayer rather than the sacrifices now denied to them. The new center of worship was now the local synagogue. As a result, Judaism became a faith that could be practiced wherever the Torah could be carried. This helped to preserve Judaism but also prepared the way for the Christian gospel.

The Diaspora (dispersion) of Israel begun in the exile, accelerated during the years that followed so that by Jesus' time Jews filled "every land and sea." Jews outside Palestine concentrated their religious life in the study of the Torah and the life of the synagogue. The missionaries of the early church began their outreach ministries among the Diaspora, using the Greek translation of the Old Testament. Within many Jewish synagogue congregations were “God-fearing” Gentiles (anyone who was not a Jew)—those who believed in the Jewish God and followed the Law to some extent but not fully.

As a nation, Israel ceased to be an independent nation and became a minor territory in a succession of larger empires. First, Alexander the Great acquired Palestine in 332 BC. After his death, Israel was ruled by descendants of Alexander's general, Ptolemy, from Egypt who were considerate of Jewish religious sensitivities. However in 198 BC, descendants of another of Alexander's generals, Seleucid, took control. Antiochus IV Epiphanes (175-164 B.C.) imposed Greek language and culture on Israel (Hellenism). A segment of the Jewish aristocracy adopted Greek ways. The majority of Jews were outraged. Laws were enforced with extreme cruelty. Antiochus IV Epiphanes attempted the eradication of the Jewish religion by prohibiting some of the central elements of Jewish practice. He ordered copies of the Torah (the Pentateuch) to be destroyed. He required offerings to the Greek god Zeus. His crowning outrage was the erection of a statue of Zeus and the sacrificing of a pig in the Jerusalem temple itself!

Opposition to Antiochus was led by Mattathias, an elderly villager from a priestly family, and his five sons (one named Judas the Maccabee—thus the Maccabean revolt). Hanukkah is a celebration of this victory. He destroyed a Greek altar and killed Antiochus' emissary to his village. This triggered a 24-year war led by Maccabeus resulting in the independence of Judah. Mattathias' sons all ruled. Yet, the dynasty became corrupted and turned into an aristocratic Hellenistic regime. Those who had supported the Maccabean revolt soon fell out of favor. The Pharisees (the religious group formed during this time to keep Israel pure) were actually persecuted by their own leaders from 103-76 BC

In 63 BC, an expanding Roman empire entered in the picture. Pompey took Jerusalem after a three-month siege of the temple area, massacring priests in the performance of their duties and entering the Most Holy Place. This sacrilege began Roman rule in a way that Jews could neither forgive nor forget! The Roman Senate appointed Herod, a non-Jew, king in 40 BC He was subject to Rome.

During this time period, the Pharisees built a "hedge" around the law to enable Jews to live righteously before God in a world that had changed drastically since the days of Moses. Few in numbers, the Pharisees enjoyed the support of the people and, as a group, was the only one to survive the destruction of the temple in AD 70, thus being the spiritual progenitors of modern Judaism.

The New Testament opens with the births of John and Jesus. About 30 years later, John challenged the Jews to indicate their repentance (turning from sin and toward God) by submitting to water baptism—a familiar Old Testament practice used for repentance as well as when a Gentile converted to Judaism (to be washed clean of idolatry).

God's incarnate Son publicly showed the world what God is like and taught His perfect ways for 3 – 3½ years. After preparing 12 disciples to continue Christ's earthly work, He died voluntarily on a cross for mankind's sin, rose from the dead, and returned to heaven. The account of His earthly life is recorded in 4 books known as the Gospels (the biblical books of Matthew, Mark, Luke and John named after the compiler of each account).

After Jesus’ return to heaven, the followers of Christ who were then empowered by the Holy Spirit spread God's salvation message among the Jews, a number of whom believed in Christ, while the apostle Paul and others carried the good news to the Gentiles during 3 missionary journeys (much of this recorded in the book of Acts). Paul wrote 13 New Testament letters to primarily Gentile Christian churches (Romans through 2 Timothy).

The section in our Bible from Hebrews to Jude contains 8 additional letters penned by five men, including two apostles (Peter and John) and two of Jesus’ half-brothers (James and Jude). The author of Hebrews is unknown. The apostle John also recorded Revelation, which summarizes God's final program for the world. The Bible ends as it began—with a new, sinless creation.

Many women today have very little knowledge of the New Testament beyond a few stories about Jesus and a few of Paul’s letters. You might not have much. Perhaps you know about Jesus and the miracles He performed as well as His death and resurrection. When you read the gospels, you can easily think, “What’s written in it happened two thousand years ago. So long ago! What do those women have in common with me? They didn’t live in my world.” Do you tend to think that way, as though they are just names on a page?

Maybe you like to read biographies. Doesn’t reading someone’s biography make that person come alive for you? Or, you may have done genealogy work on your family tree? It can be great to find something to brag about. But, you can also find out some of your ancestors’ dark secrets and hardships. I don’t know about you, but I feel a connection to that great-great grandmother when I learn a little bit about her life.

This study covers the lives of some New Testament women and the time period in which they lived. Some you may have heard about—Jesus’ mother Mary, Martha and her sister Mary, Lydia and Priscilla. Others are strangers to you—the Canaanite woman, the widow of Nain, or Phoebe.

Maybe these New Testament women lived years ago, but they were still women just like we are. They cooked meals, did laundry, and raised children. They had responsibilities inside and outside of their homes. Some even had home businesses. A couple of them could put together a banquet in a short time. They experienced hormone fluctuations, PMS, and menopause. They laughed with their friends, differed with their mates, and cried when a loved one died. They wrote songs and played musical instruments. I bet they all found ways to use their 20,000 words per day!

At one time, they were 20-somethings, then 40-somethings, then 60-somethings and more. They wore beads, earrings, and anklet bracelets. Their hair needed to be combed and fixed, and it turned grey as they aged. No doubt, some of them, if not all, had something on their bodies that sagged!

These women also experienced fear at various times just like we do. They faced rejection from peers, sick family members, and disappointments. They faced trauma and surprise houseguests. They even had “bad” days when things didn’t go right, sometimes due to their own choices. These were everyday women, just like we are. Their stories—snippets of their biographies—are preserved for us to get to know them, and to know their God who is also our God.

Jesus Christ entered into the midst of their lives, visibly representing God to them, loving them dearly, and changing their lives forever! He does the same for you and me today.

Map of Israel During This Time Period 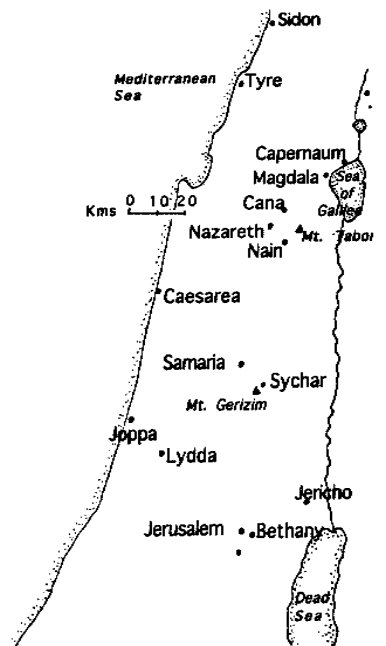 From the series: Jesus, Lover of a Woman’s Soul PREVIOUS PAGE | NEXT PAGE