Home » Profiles of Perseverance: Sustained By Hope In The Rough-And-Tumble Of Real Life

7. Elijah: God's Humble Prophet 1: The God of the Impossible Situation

Under Saul, David and Solomon, the loosely associated 12 tribes of Israel formed one nation (1050-930 B.C.). For centuries before that, though, friction had existed between the northern and southern tribes. So after Solomon died (930 B.C.), the 10 tribes dwelling primarily north of Jerusalem broke off and formed a new nation referred to as the northern kingdom, or Israel, with the hilltop city of Samaria as its capital. The 2 remaining tribes—Judah and Benjamin—became known as Judah (Judah was the larger of the two) and is sometimes referred to as the southern kingdom with Jerusalem as its capital. For the most part, Israel’s kings were idolatrous and rebellious against God. Some of Judah’s kings were likewise.

Our study of Elijah begins during the reign of Ahab in Israel who became king in 874 BC, ~66 years after the death of Solomon. Those six decades were characterized by murder, deception and hatred proceeding from the very throne of Israel. Then the throne was turned over to Ahab who married Jezebel. The mention of the marriage is significant for two reasons: 1) Jezebel was the dominant member of the marriage who controlled Ahab’s reign and 2) she initiated Baal worship in Israel (to be discussed in more detail in Lesson 2). Her hometown (Sidon in the land of Phoenicia—see map at the end of lesson one) was the birthplace of this idolatry. It had not found its way into Israel until this marriage.

Both nations, Israel and Judah, were falling deep into idol-worship, so God chose special men and women to be prophets, His mouthpieces. Some, like Elijah, were called into a lifetime of service to God, while God asked others to perform one simple, yet important job. Yet, all responded to God’s call to give God’s messages to both kings and ordinary people.

Use a Bible handbook, Bible text notes, or other sources to find out more information about the time period in which Elijah lived. Suggested topics to research:

The mention of Elijah in 1 Kings 17:1 is abrupt. Unlike David or Joseph, we know nothing of his age, family or youth. His name combines 2 names for God: El (from Elohim which is translated God) plus jah (from Yahweh which is the personal name God told the Hebrews to call Him). So, his name means My God is Yahweh. This was his choice and his message. His place of birth was across the Jordan River in a land of solitude and outdoor life. The people were rugged, muscular, uneducated and unpolished. Elijah’s style was likewise bold with no frills. His clothes—a rough, hairy garment probably woven from goat’s hair (called sackcloth) and large leather belt—were part of the dress of prophets at that time (2 Kings 1:8). Our study will reveal why Elijah was indeed a man like us.

·         the life circumstances of the widow (her impossible situation)—

Historical Insight: A room on the roof was a sign of once having prosperity, since only a wealthy man could afford to add another addition to his home. Oil was used not only for cooking but also for lighting the house at night as well as medicine for wounds and bathing or deodorizing the skin when there was little water.

3. Concentrating on verses 17-24, what further challenge did the widow face?

4. How did Elijah’s knowledge of and faith in God benefit this family?

Scriptural Insight: Commentators disagree about the woman’s faith initially. Her oath in the name of the Lord was either an accommodation to Elijah whom she recognized as an Israelite or a genuine expression of previous knowledge of and commitment to the God of Israel. It doesn’t matter. What does matter is that she responded in obedience to the word of the Lord, which demonstrates faith. The Lord honored her faith by fulfilling His promise miraculously. They could get this provision nowhere else. Something only God could provide. Only the true God could provide flour and oil in a drought! Only the true God can give life!

5. Read 2 Kings 4:1-7, a similar account of another woman in an impossible situation during the ministry of Elisha who was Elijah’s successor. [The ministry of Elisha is found in 2 Kings 2-9.] What Elijah learned in his time with the widow of Zarephath, he must have certainly shared with Elisha who didn’t hesitate to help another woman. Her husband had been in the ministry as a prophet at one of the three schools where men were trained in the word of God similar to modern seminaries. Discuss the following:

6. List those circumstances or situations in our lives today that would parallel anything in either of these passages, I Kings 17:1-24 or 2 Kings 4:1-7? Example: being a single mom.

We will focus on 3 applications to this lesson, all centered on what to do with an impossible situation.

7. Your Life’s Journey: The woman of Zarephath (and the prophet’s widow) grew in knowledge of God in their “kitchens” through an impossible situation. What are you (or someone close to you) facing today that is bleak and/or impossible?

Step #2 Think Rightly About It.

When the boy died, the woman immediately entertained error in her thinking, “God is punishing me for my sin by killing my son. It’s all my fault.” This is a common reaction among many people who do not know God or His ways when personal tragedy enters their lives. But, it is wrong thinking. Although some hardship comes as the consequence of a person’s wrong choices (as in David’s later life), most does not as we have seen in our study so far. Based on our study of Joseph, was he put into slavery, jailed, etc. as a consequence of his behavior? No! Was David on the run from Saul for 13 years because of his own fault? No! And, God was with both of them.

8. Your Life’s Journey: Are you blaming yourself (or someone else), thinking that God is punishing you with this impossible situation? Read the following verses to see what God says regarding this error in our thinking: John 9:1-3; Matthew 5:45; 7:24-27 (what happened to both houses?); Romans 8:1. Make any comments below.

Step #3 Bring It To God. Trust That God Loves You, He Knows What Is Going On, And He Can Do Something About It.

9. How does Elijah deal with the difficult situation of the boy’s death, a situation outside of Elijah’s control? [Hint: Where does he go? How does he react?]

11. Think through what you do when tragedy strikes or when a test comes.

·         Based upon what we have learned so far in this study, is this the correct (Biblical) response?

12. What have you learned from today’s lesson that will help you deal with what appears to be an impossible situation you may be currently facing? Describe anything you have learned about going to God when tragedy strikes. Place on your “bed” that critical situation—that burden that is burning your energy, weighing on your mind. God is still the God of IMPOSSIBLE SITUATIONS.

Think About It: Reflect on one man’s choice of how to think in a difficult time: First, God brought me here. It is by His will that I am in this straight place. In that fact, I will rest. Next, God will keep me here in His love, and He will give me grace to behave as His child. Then, God will make the trial a blessing, teaching me the lessons He intends me to learn and working in me the grace He means to bestow. Last, in God’s good time, He can bring me out again—how and when, He knows. Let me say, I am here: 1) by God’s appointment, 2) in His keeping, 3) under His training, 4) for His time. Amen. (In Quietness and Confidence, Dr. Raymond Edmund, former professor at Wheaton College) 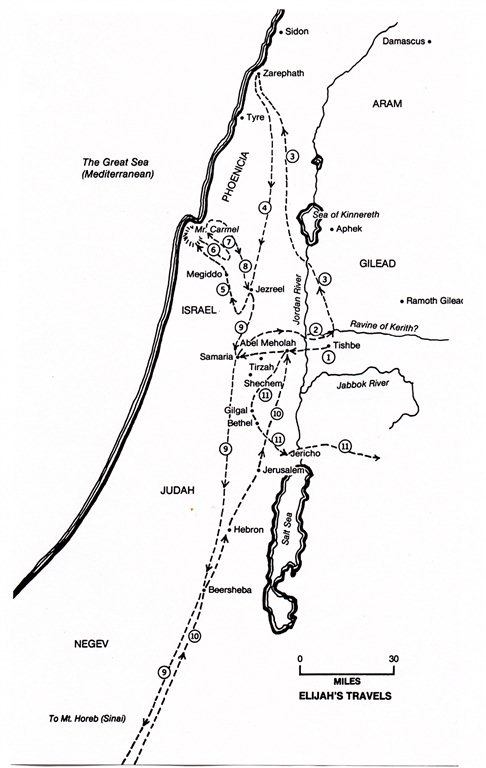