“But now apart from the law the righteousness of God (which is attested by the law and the prophets) has been disclosed – namely, the righteousness of God through the faithfulness of Jesus Christ for all who believe. For there is no distinction, for all have sinned and fall short of the glory of God. But they are justified freely by his grace through the redemption that is in Christ Jesus. God publicly displayed him at his death as the mercy seat accessible through faith.” (Romans 3:21-25a)

Christ’s Finished Work on the Cross

Salvation is available on the basis of a single condition: faith (or “belief”). God acted; we are to respond to his action. Those who respond with faith in Jesus Christ, God’s Son, receive a firm assurance of security (1 John 5:13), a secure new identity in Christ (2 Corinthians 5:17), and a true knowledge of God as seen through all that he has done for us. Last lesson began our study of 6 “words of the cross”—the direct result of Christ’s finished work on the cross. These 6 terms describe how our relationship with God has changed because of our faith in Jesus Christ. 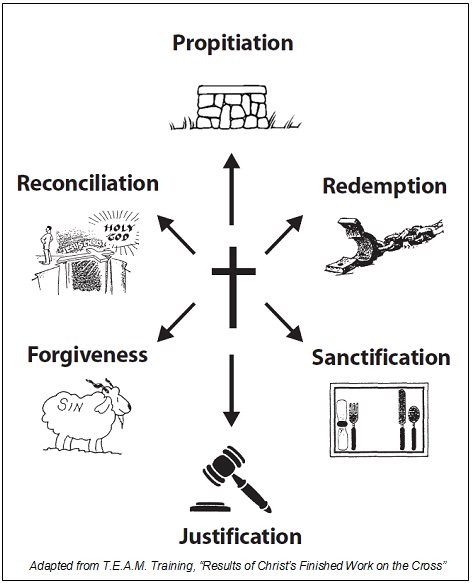 The diagram above shows these 6 “words of the cross” and an image representing each. The last lesson covered the first 3 terms and their meanings:

In this lesson, we explore the blessings of forgiveness, justification, and sanctification.

Forgiveness: “Man’s guilt has been transferred to a substitute and taken away.”

Focus on the Meaning: The Greek word translated “forgiveness” means literally, “to send off or send away.” The result is “to separate the sin from the sinner” as described in Psalm 103:12 and Leviticus 16:20-22 (the “scapegoat” illustrated in the symbol at right).

Forgiveness represents an important change in our relationship with God. Our problem before Christ: Mankind is guilty before a holy God. God’s answer is to take away the guilt.

3. According to Hebrews 9:22, what was required for God to offer forgiveness?

5. What do you learn from 2 Corinthians 5:19 about God keeping track of our sins now?

6. Read 2 Corinthians 5:21. The action of God described in this verse is called the “Great Exchange.” What is being exchanged?

Think About It: Since the believer’s sins have been taken away, God does not hold them (sins) against him/her. Sins are applied to Jesus who takes them on our behalf. Forgiveness is complete and continual. As 2 Corinthians 5:19 says, [God] is “not counting men’s sins against them.” Only one sin separates any man or woman from eternal life with God—rejecting faith in Jesus Christ (John 3:16-18).

According to Ephesians 1:7, forgiveness is something we possess as believers through Jesus’ blood shed for us. We receive God’s forgiveness for all our sins (past, present, and future) from the moment we place our faith in Jesus Christ. Yet, many believers continue to live in guilt.

9. Graceful Living: Dwell on the FACT that Jesus will cleanse your conscience from guilt. Will you take him at his word? If there is any past sin for which you are still feeling guilty, claim God’s complete forgiveness today. You can simply tell God,

“Thank You for forgiving me, thank You for cleansing me, thank You for redeeming my sin and turning something evil into something good. Thank You for being bigger than my sins, and being able to turn things around in ways I cannot imagine. With Jesus’ help, I receive the assurance that You have forgiven me. Help my heart catch up with my head on this. Help me to see that You allowed me to go down that dark path into sin because You are able to redeem even the worst things we do.” (Sue Bohlin, Probe Ministries, Sept. 2012)

Now, choose to believe you are forgiven and allow Jesus to cleanse your conscience from any residual guilt. Every time you think about it again, thank God for his amazing gift!

10. Graceful Living: Read Ephesians 4:32-5:1. Since you have been completely forgiven, what is Jesus now calling you to do in your relationships with others?

Justification: “The believer in Jesus Christ is declared righteous before God.”

Justification is a legal term that literally means, “to declare righteous, to declare not guilty.” We introduced this in Lesson 2. English New Testaments use “justified” and “made righteous” interchangeably. Justification represents an important change in our relationship with God. Our problem before Christ: Man’s need for perfect acceptability before a holy God.

12. God’s justice demands punishment for sin. Based on what you have learned, how is his justice satisfied?

Scriptural Insight: God’s forgiveness and justification of the believer are not due to compromise on God’s part or a relaxing of his holy standards. These are possible because the sacrifice of Jesus Christ fully honored and satisfied the righteous demands of a holy God.

13. Who gets to receive the “not guilty” verdict?

In our culture, we use the term “acquitted” for someone who is declared not guilty. And, this acquittal is for the one wrong act of which the person is being accused. Yet, we do many other wrong things. For us as believers, God declares us “not guilty” of all sin, once and for all, based on our faith alone in his Son! What a deal!

Scriptural Insight: “The term ‘justified’ describes what happens when someone believes in Christ as his Savior: from the negative viewpoint, he [God] declares the person to be not guilty; from the positive viewpoint, he [God] declares him to be righteous. He cancels the guilt of the person’s sin and credits righteousness to him…God will declare everyone who puts his trust in Jesus not guilty but righteous…Christ’s righteousness (his obedience to God’s law and his sacrificial death) will be credited to believers as their own. Paul uses the word ‘credited’ nine times in [Romans] chapter 4 alone.” (NIV Study Bible, note on Romans 3:24, page 1710)

So, God not only declares us “not guilty” of all sin through our faith in his Son, he also gives us a new status called “righteousness before God.” It is not our own righteousness that does it. When God looks on you and me, he sees his Son’s righteousness taking the place of our sin—even our sin after we’ve been believers for a long time. Picture an accountant’s spreadsheet dedicated to your life. On the left side of the page is the heading “your sins”; on the right side of the page is the heading “Christ’s righteousness.” When you and I sin (intentionally or unintentionally) for the rest of our lives, God replaces that sin on the “your sins” side with Christ’s righteousness and puts your sin on his side—your sin is taken away (forgiveness). It is a continual balancing. Your sin never stays on your side of the page because God declares in 2 Corinthians 5:19 that he is “not counting men’s sins against them.” You are forever declared “not guilty” in his sight. Isn’t that great news?!

16. Why would the image of a judge’s gavel be a good symbol for justification?

Focus on the Meaning: Justification is God’s act as Judge, where he declares a guilty sinner to be totally righteous in His sight, on the basis of Christ’s finished work on the cross and that person’s faith in him. Justification is by faith alone and not depending upon any works a believer can do to earn acceptability in God’s sight.

17. In Philippians 3:2-6, Paul describes his “confidence in the flesh” (including his efforts) to achieve righteousness before God.

18. Graceful Living: Are you still wrestling with the notion that you are not good enough to please God? Can anyone ever be good enough on her own merits to please God? No! Dwell on the FACT of your justification—being declared righteous so that you are now perfectly acceptable to a holy God based on your faith in his Son. How do you feel about this? When you are tempted to think that God could not possibly accept you because of your weaknesses and guilty past, what should you declare to yourself?

Sanctification: “Set apart as God’s possession for his exclusive use.”

Sanctification represents another important change in our standing with God. Our problem before Christ: Man’s need to be separated from the world and separated to God. God demands that we be holy as he is holy (1 Peter 1:16). Because the two words are so closely connected, sanctified and holy are used interchangeably in our English translations. They mean the same thing, though.

21. Sanctified ones are called “holy ones” and “saints” in the New Testament. Read Romans 1:7, 2 Corinthians 1:1, and Ephesians 1:1. Who are being called saints?

From the Greek: The word “saint” comes from the Greek word hagios, “holy,” meaning separated from sin and dedicated to God. All believers are called “holy ones” (hagioi) based upon their faith in Jesus Christ, not on any exceptional behavior. A saint is identified by position, what God declares to be true about you. Every believer is one of God’s saints, totally loved and accepted by him—considered a saint of God by position, not by behavior. (Vines Expository Dictionary of Old and New Testament Words, pages 307-308)

23. Graceful Living: Dwell on the FACT that God declares you holy because of your faith in Christ. You are set apart by him, for him. This is your status before God because of your faith. Your behavior matches your position when you submit to the Spirit’s work to intentionally separate you from what God calls sin and then commit yourself to being used for his purposes—24/7.

Describe how you could commit yourself to God’s use throughout a typical day as you dress, eat, interact with the people around you, care for your household, be a mother or grandmother to children, work for an employer…

Think About It: Mankind’s disease was sin. Because of this disease, we were: 1) never able to make ourselves well, 2) in bondage to the disease, 3) alienated from the one who could heal us, 4) carrying the guilt of having the disease, 5) experiencing cumulative effects of the disease, and 6) unable to live a purposeful life. Jesus’ finished work on the cross removed all these effects of the disease so that “by his wounds you have been healed (1 Peter 2:24)”—truly healed!

An understanding of Christ’s finished work on the cross is the basis for a firm knowledge of our identity in him—a foundational truth for successful Christian living. It was totally God’s work to make sinners acceptable again in his sight. Our proper response is to trust and rest in his work, and to continually offer him thanks from grateful hearts along with our willing service.

In a way—in spite of the power and importance of the six words of the cross—it can be said that they all have been accomplished to make the seventh great word possible: “Regeneration,” the restoration of spiritual life. This is the subject of the next lesson.

But, for now, the chart below gives a good review of what you have learned in this lesson. Each one of these “words of the cross” is the result of Christ’s finished work on the cross on your behalf. The last lesson stressed that the best test of whether you have really learned anything or not is by explaining what you learned to someone else. So…

24. Graceful Living: Review each of these “3 words of the cross” one at a time. Then, write how you would explain that concept (what the concept means for the believer, not necessarily the definition of the word) to someone who hasn’t had this course but needs to know what she has in Christ. Think in terms of someone from a particular age group or stage of life.

You get the idea. Now start explainin’…