Home » Profiles of Perseverance: Sustained By Hope In The Rough-And-Tumble Of Real Life

After Moses and Joshua died, the people of Israel were governed by a series of judges and priests. This was an effective system only if the leaders (e.g., the judges) and people were committed to following the Lord. The book of Judges in the Old Testament records the failure of the people and leaders under this system. God had predicted this failure (Deuteronomy 17:14-15) and knew that eventually Israel would be ruled by a king.

Just before 1051 BC, the year Saul became king, the people of Israel demanded that Samuel (the prophet) select a king to rule over them. Samuel’s sons were dishonest judges and thereby disqualified for the job. God had predicted Israel’s desire for a king so they could “be like other nations” (1 Samuel 8:20). However, God had called Israel to be different from all other nations. In calling for a king, Israel was indirectly rejecting God as ruler.

The Lord agreed to let the people have a king to rule them, thus Saul was chosen as the first king of Israel. Saul was a “choice and handsome man” and stood head and shoulders above all other men. Though Saul looked the part, he was impetuous, hot-tempered, disobedient and jealous. Saul was 30 years old when he became king and reigned over Israel 42 years. After Saul openly disobeyed God twice, God told Samuel (1 Samuel 13:13-14) that his kingdom would not endure and that God had sought out a man after his own heart. That man was David.

Most everyone who has ever been to Sunday school or Vacation Bible School as a child knows the familiar story of David and Goliath. We know David as the young shepherd boy who slew a giant with a one stone and a simple slingshot. We know that this brave shepherd boy grew up to be a great king of Israel. We also know that Jesus Christ descended from the house of David. But what else? Who was this David and what can we learn from him today?

Use a Bible handbook, Bible text notes, or other sources to find out more information about the time period in which David lived. Suggested topics to research:

·         The Philistines and why they were enemies of God and Israel—

Scriptural Insight from 1 Samuel 16:14-15: The Spirit of God not only departed from Saul, but God permitted an evil spirit to “terrorize” (NAS, “torment” NIV) Saul as judgment for Saul’s sins. Saul was then left to rule in his own strength without the Holy Spirit to help him. Note that the Spirit of the Lord departs from Saul BEFORE an evil spirit came. Before Pentecost (Acts 2), the Holy Spirit never permanently resided on anyone except for David (1 Samuel 16:13) and John the Baptist (Luke 1:15, 41). The Spirit of God would come for a temporary time to enable someone for an act of service to God and then depart (and then possibly come again for another act of service). The absence or presence of the Holy Spirit in the Old Testament says nothing about salvation. However at Pentecost, and to the present era, the Holy Spirit comes into the believer at the moment of salvation and seals us until the day of redemption (Ephesians 4:30). He will NEVER, EVER depart from us!

3. What does this show you about David’s character even as a teen? (Note: David was about 16 when he was anointed by Samuel and 30 when he became king over Judah.)

4. Your Life’s Journey: Have you ever been in a position where you knew God was leading you in a certain direction, yet the timing wasn’t right? Describe how you knew the timing was not right and what you did.

Think About It: I wonder how many people think that David, after he killed the giant, within a matter of just a few days took the throne and became the youngest king in the history of Israel? Well, in case you were one who thought that, you need to know it didn’t happen that way. (Charles Swindoll, David, p. 51)

5. Read 1 Samuel 18-19:2. (Chapter 17 tells the story of David’s valiant defeat over Goliath. You may read it for background information although we will not be looking in detail at that chapter.) Discuss David’s life, challenges and rewards, after being anointed as future king.

8. Your Life’s Journey: David, the boy anointed by God as the next king of Israel was now on the run from a madman (and would be for 13 years!). David was now living in a cave with 400 malcontents (those who were evading over-taxation by Saul or who were discontented with how Saul had treated them). Imagine! What could have been David’s reaction towards God if David had focused on outward circumstances?

Think About It: “If God allows you to be stripped of the exterior portions of your life, he means for you to cultivate the interior.” (Oswald Chambers)

We can get an inside view of what David felt and did during his years of flight from Saul. It was probably during this time that David wrote many of the wonderful Psalms we know (in particular Psalms 34, 52, 54, 56, 63, and 142). Suggestion: Put slips of paper to hold your place in each psalm.

13. Your Life’s Journey: The bottom had seemingly dropped out of David’s life, yet he persevered despite hopeless circumstances. Though God had provided a means for escape, every tangible support system in David’s life had been removed one by one until he had nothing left to lean on except God. Yet David had hope in “the God who accomplishes all things (NAS) / fulfills His purpose for me (NIV)”as expressed in Psalm 57:2. Where is your hope when all else fails? Support your answer with scripture.

14. David understood waiting on God. If we live by David’s example we need to learn how to wait (to be patient) on God’s perfect timing. God is in the “human development business.” What can we know for sure while we wait? Read Philippians 1:6 and 1 Thessalonians 5:24 for insight. (Note: If you doubt that God has a plan for YOU, read Ephesians 2:10.)

From the Greek: The Greek word for patience (one definition) is hypomone. It is defined as the “quality of endurance under trials. Those possessing this virtue are free from cowardice or discouragement. It is mainly an attitude of the heart with respect to things” (or circumstances). (Adapted from The NIV Compact Dictionary of the Bible, by J.D. Douglas and Merrill C. Tenney)

15. Your Life’s Journey: How does David’s example of patiently waiting on God encourage you to wait on God in whatever circumstances you find yourself? 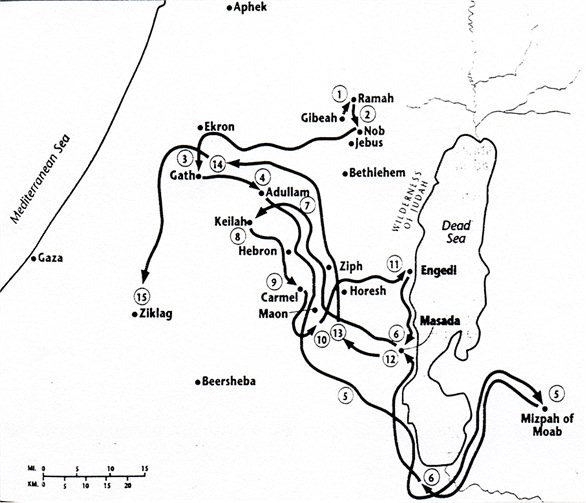