Critics argue that Joshua depicts a complete destruction of the people of Canaan, while Judges shows a more accurate picture of a long fight for control of the area. Kitchen responds, “Thus, to sum up, the book of Joshua in reality simply records the Hebrew entry into Canaan, their base camp at Gilgal by the Jordan, their initial raids (without occupation!) against local rulers and subjects in south and north Canaan, followed by localized occupation (a) north from Gilgal as far as Shechem and Tirzah and (b) south to Hebron/Debir, and very little more. This is not the sweeping, instant conquest-with-occupation that some hasty scholars would foist upon the text of Joshua, without any factual justification.

“Insofar as only Jericho Ai, and Hazor were explicitly allowed to have been burned into nonoccupation, it is also pointless going looking for extensive conflagration level as at any other Late Bronze sites (of any phase) to identify them with any Israelite impact. Onto this initial picture Judges follows directly and easily, with no inherent contradiction: it contradicts only the bogus and superficial construction that some modern commentators have willfully thrust upon the biblical text of Joshua without adequate reason. The fact is that biblical scholars have allowed themselves to be swept away by the upbeat, rhetorical element present in Joshua, a persistent feature of most war reports in ancient Near Eastern sources that they are not accustomed to understand and properly handle.”1

There was a period of dormancy in Egypt during the 13th century. Ramases III was restoring it to power, but the invasions from the west (Libya) and the sea people called Tjeker, revealed in the story of Wen Amon (ANE, p. 16), damaged Egypt. The Hittite empire in the north was also under pressure.

The sea people were repulsed by the Egyptians and settled along the coast--Ugarit, Sidon, Tyre. The Pelast seized territory from Joppa to Gaza (Gaza, Ashkelon, Ashdod, Ekron and Gath). Many Canaanites moved and established their capital at Tyre and are called Phoenicians from that time on (cf. the last lecture).

The Merenptah stela (13th century) gives us a date of 1210 for an Egyptian invasion that encountered a group called Israel. The period from 1210 to 1042 (almost 170 years) would be the period of the judges. “The latest setting of the book of Joshua (if granted even minimal credence) would then in principle lie immediately in the decade or so before 1210, along with any Israelite entry into Canaan from the outside.”2

Excavations suggest a time of anarchy. Bethel had four destructions by fire in two centuries. Megiddo had repeated troubles between its rebuilding and Solomon.

The surrounding nations were well organized, but Israel had no central government. Noth developed the idea of an amphictyonic organization on the order of some of the Greek states where a central sanctuary formed the focal point of the whole group.3

During the 12th century eastern Syria was inundated by Arameans. The capital was later at Damascus.4

The iron industry was controlled by the Philistines (1 Sam. 13:19-22). The Hittites held the secret of Iron, and it may have been brought to Palestine by the sea people. Hence, the Philistines controlled it. The Iron Age begins at this time. Iron, as indicated, is of Anatolian origin (Heb.: Berzel = Pherrus the “l” is intensive as in Carm-el, rich vineyard). Israel must have had a low profile during this time.

The first oppression is from Chushan-rishathaim of Syria (Heb.: Aram). Chushan is a place name in the second millennium. It appears on a list of Ramases III (13-12 centuries B.C.)

The period of the Judges is not a very high point in the Israelite history. The two appendixes in particular show Israel at the nadir of her existence. The bright spots are the various places where individual faith breaks forth. The book of Ruth, in particular, is a bright ray in an otherwise dark corner.

The Chronology of the Book of Judges

This section presents one of the most difficult aspects of Old Testament Chronology. The first point of contact must be the 480 years between the Exodus and the fourth year of Solomon (1 Kgs. 6:1). The problem comes with the 450 year total of the data in Judges from the first oppression to Eli. If these years be taken consecutively, there are too many. Josephus, whose handling of biblical chronology leaves much to be desired, takes them consecutively and comes up with 592 years for the same period covered by 1 Kgs. 6:1 (by adding 111 years of servitude). The 450 years in Acts 13:19-20 is placed during the judges by some MSS and during the Egyptian period by others. Some people drop the periods of servitude to reduce the years in Judges, but the best solution is probably to assume that the years are not intended to be sequential, i.e., the various judgeships overlap since none of them is intended to indicate control over the entire 12 tribes.5 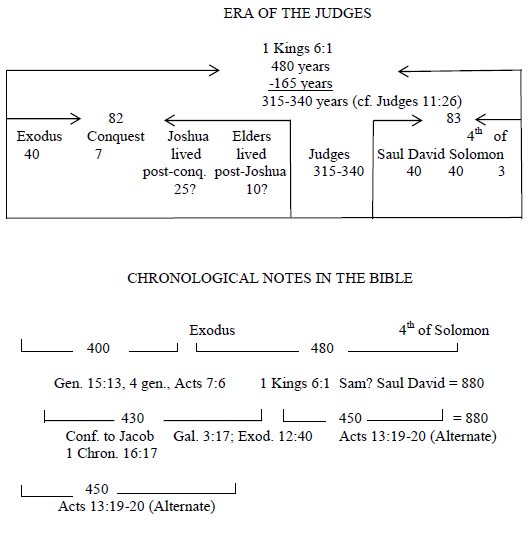 4Cf. Unger, Israel and the Aramaens of Damascus.