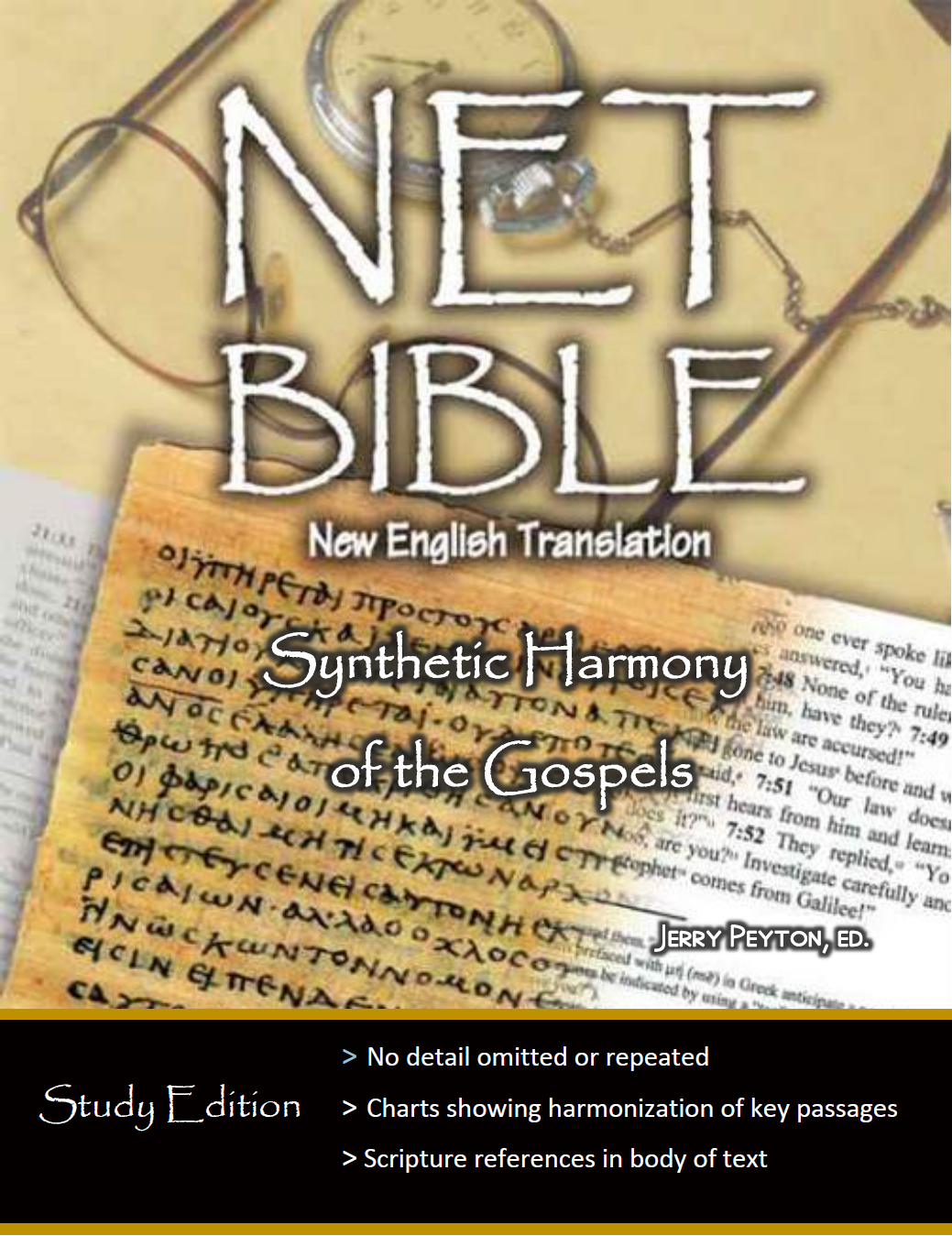 To View the Full Version of the Synthetic Harmony of the Four Gospels by Jerry Peyton, Click Here (PDF)

For a Synopsis of the Four Gospels by Gregory White, Click Here

For a Chronological Journey through the Gospels In His Footsteps by Hon Stuart Robert, Click Here

I began compiling the four Gospels into one narrative when I taught the Gospels at a Christian high school. While I understood the unique value of each Gospel, I wanted students to see the flow of Christ’s life. And they appreciated not having to read every verse in all four Gospels, some of which are repeated almost verbatim.

I also read a one-year chronological Bible and was amazed at how much I learned. After reading, studying and teaching the Bible for fifty years I saw things I hadn’t seen before because I saw them in their historical context. The Bible flowed more like a story or movie than a collection of books. But I was frustrated at having to read the exact same accounts in different books—especially the historical books of Kings and Chronicles. It was then I decided to compile my own chronological harmony of the Gospels—not because other harmonies do not exist or that I can produce a better harmony, but because doing it would force me to deal with the text myself.

I have an MA in biblical studies from Dallas Theological Seminary and an MA in faith and culture, with an emphasis in international human rights, from Trinity International University. I gave my first sermon when I was fifteen, over fifty years ago, and have been a pastor or bible teacher ever since, including teaching Bible at a Christian college and high school.

I did not formally study Greek or Hebrew and am not qualified to do Bible translation work, which is why I use the NET Bible for this harmony.

In his article, “Is Harmonization Honest?” Dale Ellenburg describes four types of harmonies:

Radical harmonizing suppresses variant details in one text by replacing them with preferred wording drawn from another version. Radical harmonizing tends to produce a uniform official version of a saying or story in separate Gospels. A synthetic harmony expands a text by adding details from one account to another to produce a conflated version that is not identical with any one source. Sequential harmonizing preserves two or more versions of the same material as separate incidents in the same narrative. This produces repetitions of sayings and stories that literary critics call “doublets.” . . . a parallel harmony presents two or more versions of the same account side by side in a synopsis for easy comparison.1

While I sought to harmonize the four Gospels by evaluating every verse myself, I also used other harmonies for comparison and for the chronological framework:

This is a Synthetic Harmony of the Gospels

Nothing is repeated that is not repeated within the same Gospel, including some things that sequential harmonies repeat because the details are different in different Gospels.

*The chronology of much of the Gospels is not known. I have relied heavily on Cheney’s chronology, while differing significantly from him in some instances.

*This harmony flows like a movie script, where movement from one place or topic to another is geographically and topically logical. Chronology or sequence clearly stated in the text, such as “the next day,” are maintained.

This is Not a “Perfect Harmony”2

*“No prophecy of scripture ever comes about by the prophet’s own imagination, for no prophecy was ever borne of human impulse; rather, men carried along by the Holy Spirit spoke from God” (2Pt 1:15-21).

*Jesus: “I tell you the truth, until heaven and earth pass away not the smallest letter or stroke of a letter will pass from the law until everything takes place” (Mt 5:18).

*All the differences in the Gospels put together do not effect in the slightest any theological or historical fact/truth. Let’s not strain at gnats and miss the camels.

The Gospels are four concise biographies that have condensed and rearranged several years of events and teaching into a few pages without changing the truth of anything that was said or happened—because the writers were “carried along by the Holy Spirit.”

No Gospel harmony can be produced without significantly rearranging the sequence of events in each Gospel. No chronology can be determined with certitude. That is not the goal. Chronologically arranging Scripture provides a flowing narrative presenting a clearer historical perspective.

*Coming to grips with the differences/variations in biblical accounts of the exact same event may challenge our understanding of what it means for the Bible to be the inspired word of God. But it is better for us to work that out for ourselves than blindly accept someone else’s conclusions. And it is far better to ask questions and diligently seek answers than remain a child who depends on his parents’ convictions. Wolves love going after such innocent, gullible children.

*Scripture references placed only in topical headings, not within the body of the text

My hope is that this Gospel harmony will both fill a need and stimulate a thirst to know Jesus Christ better.

Why not get to know Jesus Christ better by reading his life, ministry and teaching as one magnificent, unbelievable but true adventure? The greatest adventure story of all time.

3 Differences not simply where one account adds or leaves out details in other accounts but where the details given differ from Gospel to Gospel.

Jerry has been studying and teaching the Bible for over 50 years, as a pastor, in a Christian college and in two Christian high schools. He has an MA from Dallas Theological Seminary and an MA from Trinity International University (TEDS). Jerry is the Executive Director of Sold No More: Abo... More