In The Footsteps of Jesus: A Chronological Journey Through The Gospels Set In The Geography, Politics, People, Power, Culture And History Of The Day 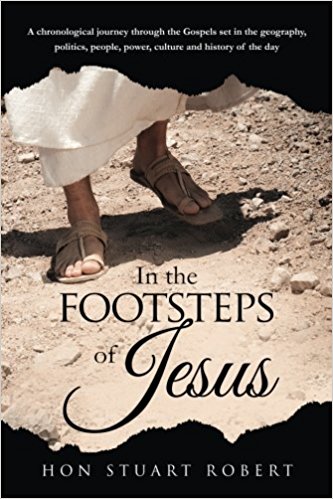 To View the Full Version of In The Footsteps Of Jesus: A Chronological Journey by Hon Stuart Robert, MP Click Here (PDF)

Also available for purchase on Amazon, and Apple iBooks.

The only reliable account of the life of Jesus, the Son of God, is the four gospels in the Bible. Whilst there are numerous authenticating secular letters, it is primarily the gospel accounts that present the greatest story of all time, the life and ultimate death of Jesus. Jesus lived for just thirty-three years and travelled no more than a couple of hundred kilometres in any direction. He lived at the time of seemingly ultimate power, that of the Roman Emperors, yet He discussed politics only once, when the issue of taxation was used to try and trap him. He penned no letters and left no monuments, yet His life and death changed the entire world through the redemptive power of the cross. All of this is told in the rich fabric of the gospels. It is a story unparalleled in the history of the world, a story that brings the author and perfector of our faith to life. A story of Jesus who fulfilled every requirement of the law and the Old Covenant, and ushered in the New Covenant of Grace; of unmerited, undeserved, unfathomable favour upon the lives of all who believe. It is a story of Jesus, whose life and death made us completely righteous, not because of anything we did, but because of everything He did. It is a story of love so divine and of grace so deep that it deserves to be told in many different ways, as the gospels do so beautifully. The gospels are not a chronological story of the life and times of Jesus though. They are four unique but complimentary accounts, written by different men to different audiences and contain different and similar stories of the life of Jesus. Whilst there are thousands of books on the gospels and each has been a blessing, there is space for yet one more book to build on this certainty. A harmonised chronologically presented gospel account of Jesus set in the geography, politics, people, power, culture and history of the day so the reader can walk with Jesus over his thirty three years as he crawled, walked and died on earth. This book is not meant as a commentary or an academic treatise, merely an opportunity to read every word of the four gospels woven into the time and setting of the historical truth of the Saviour of the world.

Many have attempted to provide a chronology of the key events from Jesus’ life sourced from the four gospels. Early attempts, starting with the ‘Diatessaron’ by the Assyrian Christian Tatian in the 2nd century erroneously tried to merge the gospels into a single narrative and remove repetition. Many subsequently tried and all ultimately failed. The gospel accounts of Jesus are too rich and varied to harmonise into a simple, lone account.

Though this is a single book, this chronological attempt does not resort to a single narrative. Every word of the gospels is included and put in a chronological order to try to build a flowing picture of Jesus’ life and ministry. It is important to note that every attempt, including this one include leaps of logic, numerous assumptions and a few flat out guesses. Every attempt is cognisant of geography, archeology, historical documents and the odd local legend. All are well meaning and there is no conclusive proof that one chronological attempt is better than another.

The four gospels were written as different accounts to different audiences and there was never an attempt to harmonise them geographically or chronologically within the Bible. Jesus probably spoke in Aramaic, but the gospels are written in Greek, which helps explains different versions of the same stories. Matthew, Mark and Luke are called ‘synoptic’ gospels because they seek to present the events of Jesus’ life with the same intent (synoptic literally means ‘together sight’). Nearly 90 percent of Mark’s content is found in Matthew, and 50 percent of Mark is in Luke. All of the parables of Christ are found in the synoptic gospels, whilst John’s gospel contains no parables (the vine and the branches in John 15:1-8 is not considered a parable). Some of the authors tended to arrange materially topically, which explains all of Jesus’ recorded miracles in Matthew being contained in just a few chapters. Jesus travelled extensively and used similar analogies and phrases to communicate His message at different times, in much the same way itinerant preachers do today. This explains why different gospels have similar content used in different circumstances.

What is refreshing about this clear lack of coordination and chronology, is that it is one of the best examples of the independence of the gospels. The differing accounts of the same activity and different order they appear in the gospels put to flight any criticism of gospel plagiarism from any ‘unnamed’ source.

This book’s chronological attempt, however flawed, tends to follow the order of the gospel of Luke. Luke was writing an historical account for his benefactor and thus tended to be more concerned with timing of events. Luke was a doctor in his time and it’s fair to say that order was a little more up his alley. He was also keen to emphasis Jesus’ compassion to Gentiles and Samaritans so that the travel diaries of Jesus in His final months on earth (Luke 10-20) is largely unique to that gospel.

Matthew was writing to a predominantly Jewish audience so his focus was not necessarily logical but more spiritual. He quotes extensively from the Old Testament and his often-used phrase (in fact thirty-two times), ‘the kingdom of heaven’ is not found anywhere else in scripture.

Both Luke and Mathew are also much longer than Mark’s gospel. Mark was writing from the teaching of Peter and to a predominantly Gentile (Roman) audience, so his account is fast paced, punchy and full of activity. A bit like Peter.

John’s gospel is different again. Many of the important events in the synoptic gospels are omitted: the temptation of Jesus, the sermon on the mount, Jesus’ transfiguration, the Lord’s prayer and the institution of communion (the Lord’s supper). You won’t find Jesus casting out a demon in John, yet only John mentions Jesus’ early Galilean ministry. In fact, it is John’s gospel that gives us the three year view of time in ministry and the number of visits to Jerusalem. The synoptic gospels appear to describe only one journey of Jesus to Jerusalem (the final one), and concentrate predominantly on just one year of Jesus’ ministry in Galilee. John also tends to write in more dialogue and discourses, rather than statement of events, leading some to argue his gospel is a more reflective style of writing.1

Please note that if there are errors, they are mine and mine alone and I apologise for them if they appear. My only caution is not to jump to conclusions too readily. Archaeological evidence seems compelling at first until the fifth century piece of pottery turns up in the undisturbed pristine first century living room. Above all, enjoy the rollicking read of the greatest story every told. Jesus, the Son of God, through whom the universe was made, came to earth to die for you and I to reconcile us back to God. Separated by the first man Adam, we are made right with our God because of the second Adam, Jesus.

For additional Bible.org material on the four gospels, featuring the NET Bible, these other resources are also available:

Stuart currently serves his nation as a member of the Australian Parliament representing the northern Gold Coast electorate of ‘Fadden’ in the House of Representatives, a seat he has held since 2007. He has been a Minister of State, serving at diff erent times as the Assistant Minister for Defen... More