Home » A Book To Die For: A Practical Study Guide On How Our Bible Came To Us

From the series: A Book To Die For: A Practical Study Guide On How Our Bible Came To Us PREVIOUS PAGE | NEXT PAGE

A curious Hindu lady, sitting with us in the living room of a mutual friend, asked, “Isn’t the Bible just one among many sacred books in the world today?” After a home Bible study class, a deeply concerned Dallas executive asked, “Why do you believe the Bible?” A rather skeptical young woman at The University of Texas in Austin challenged me during an evening rap session with the question, “How do you know the Bible is really true?” These are questions that cannot be avoided. They deserve honest answers. But what are the answers?

It must be acknowledged, of course, that each of the eleven living world religions has a definite set of documents that is regarded as conveying unique divine truth needed for man’s salvation. The Qur’an of the Muslims and the Vedas of the Hindus both have a theory of verbal inspiration and literal infallibility. The sacred book of each of these religions claims to be pre-eminent. Shintoism’s Ko-ji-ki says, “There is none among the writings in the world so noble and so important as this classic.”

For a moment this seems to settle the point. The Bible is simply one among many sacred books. Yet that is not so. It stands apart from every other book. It is unique and its uniqueness lies in four areas.

It is unique in its moral and ethical standards. The morality and ethics of the Bible are far superior to those of any other sacred book. The “god” of the Qur’an is a “god who deceives people.” Their “heaven” is a place of sensual living: eating, drinking and maidens. Why is this significant? Such concepts reflect the base nature of humanity and human instincts. On the other hand, only too well we know that the holiness, justice and love of the God of the Bible, as well as the total absence of the sensual in God’s heaven, reflect concepts that are very foreign to our nature.

Add to this the uniqueness of the message of salvation the Bible proclaims to mankind. A Hindu may choose to pursue one of three ways of works to obtain salvation. A Buddhist is a lamp unto oneself and seeks for salvation through works. A Muslim must obey the “Five Pillars” of Islam to reach Paradise. And so it is with the religions of the world. The salvation of every individual rests either partially or totally with that person. Salvation is a process dependent upon the works of the individual. Not so in the Bible. Salvation is an act of God apart from our own works. Humans are totally lost, incapable of doing anything toward our salvation. We are entirely shut up to the grace of God. Unparalleled in all religious literature are these majestic words:

For by grace are ye saved through faith: and that not of yourselves, it is the gift of God: Not of works, lest any man should boast. (Eph. 2:8, 9)

But we have only begun. For many people the most persuasive fact pointing to the uniqueness of the Bible is that the Bible alone places upon itself a test. According to Deuteronomy 18:20-22, that test is the accurate fulfillment of prophecy:

But the prophet who shall speak a word presumptuously in My name which I have not commanded him to speak, or which he shall speak in the name of other gods, that prophet shall die.

And you may say in your heart, “How shall we know the word which the Lord has not spoken?”

When a prophet speaks in the name of the Lord, if that thing does not come about or come true, that is the thing which the Lord has not spoken. The prophet has spoken it presumptuously; you shall not be afraid of him.

It is in fulfillment of a prophetic utterance that the truthfulness of the prophet is affirmed.

Philip Mauro observed the significance of this test a number of years ago when, in the introduction to John Urquhart s The Wonders of Prophecy, he said

Let it be remembered that one of the most striking characteristics of the Bible, distinguishing it radically from all other books either ancient or modern, is that it contains in every part, from the third chapter of Genesis to the last of Revelation, predictions in plain language of events that were to take place in the history of mankind on earth.

Let it be remembered too, that the prophecies of the Bible are not confined to small, local affairs, but have for their subjects the most important countries of the world, the most famous nations and empires, the greatest cities.

Had history falsified those prophecies, or any of them, the enemies of the Bible would have put the facts in evidence. Stupendous efforts have been made to prove error in statements of the Bible, whether in regard to facts of nature or facts of history. But here is a field—prophecy—which is both long and wide, and abounds in statements on many subjects.

A field in which, if the statements had been those of men, would contain as many errors as predictions; and yet the enemies of the Bible do not attempt to impeach it for false prophecies.*

Have you ever heard the veracity of the Bible challenged on the grounds of false prophecy? Yet that is the test the Bible places upon itself. No other sacred book dares to subject itself to such a potentially dangerous test.

But to leave the question at this point is to offer an incomplete answer.

The distinctiveness of the Bible rests not only upon its moral and ethical standards, its message of salvation, its test of fulfilled prophecy, but also on the nature and extent of its claim for itself.

It claims to be a direct revelation from God! True, other books claim verbal inspiration, infallibility and divine authority. But no other book makes the kind of claim the Bible makes for itself. Its claim is not based upon a single proof text, nor upon a creedal statement of a church council. It permeates every page of Scripture. No other book has that kind of evidence to support its claim. In the pages that follow, witnesses will be called from six major areas to support its claim.

Among the sacred books of the world, the Bible stands absolutely unique.

A defence of the uniqueness of the Bible, however, only proves that the Bible is unique. It proves nothing more. To answer the challenges raised against its claim for itself and our claims for it, more information, much more information, is needed. It is to meet this need that this book is offered both to the Christian and non-Christian world.

It is my personal conviction that nothing will prepare a person more for the defence of the Bible than a clear understanding of the historical process whereby the Bible came to us. Hopefully, the pages that follow will equip each of us to be more effective defenders of our faith.

An Overview of the Process: How We Got Our Bible 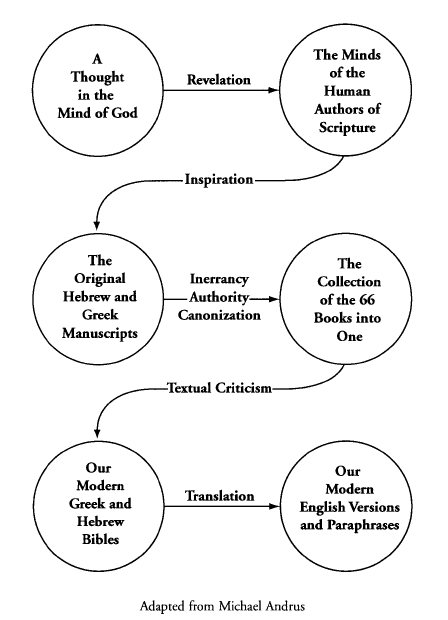 From the series: A Book To Die For: A Practical Study Guide On How Our Bible Came To Us PREVIOUS PAGE | NEXT PAGE

Dr. Bill McRae graduated from D.T.S. in 1970 (ThM) and 1983 (D.Min). After 5 years of ministry in Dallas at Believer’s Chapel, he returned to his home in Canada where he continued in a pastoral ministry. In 1983 he was appointed President of Tyndale University College and Seminary located in Toro... More