Home » An Anchor for the Soul: A Journaling Study of the Minor Prophets

From the series: An Anchor for the Soul: A Journaling Study of the Minor Prophets PREVIOUS PAGE | NEXT PAGE

What is a prophet?1

There are six Old Testament terms used to refer to prophets:

How did people recognize a prophet?

God gave Israel specific tests for true prophets, knowing that others would claim to speak for him. He wanted them to be able to discern the true prophet from the false.

By the end of the Old Testament era, the prophetic books that we have in our Old Testament were those tested by the Jews through time and determined to be written by genuine prophets.

Understanding the Messages of the Prophets

The prophets are often difficult to understand. They wrote so long ago in a foreign culture; they often used figurative language dealing with countries, people, and situations we know nothing about; and some of them had visions that are strange, very strange.

I will give you some explanations with each lesson as well as cross-references, particularly in your starred optional study.

The messages of the prophetic books were primarily aimed at the Jews as a group. Sometimes the prophet spoke to a specific sub-group, usually leaders: the governmental leaders/kings, the priests, or even other prophets. At times they gave warnings to other nations as well.

So how do we apply their messages to our day and culture?

1. Corporately to the church

God’s people, the Jews, are the primary audience for the prophets, and the church is the clearest parallel for application. Although the church is comprised of individuals, the most basic application is to the local or universal church as a group of people accountable as a whole.

Our individualistic American thinking makes it difficult for us to grasp that God holds groups of people responsible, including individuals who weren’t involved in the problem. (Examples: Ezekiel and Daniel were exiled and Jeremiah was tortured because the Jews worshipped idols and lived in ways that dishonored God, who judged the group.) We are part of the whole, for both good and bad. That’s why we are wise to speak out in a godly way when we see the church go off course on a major issue (not petty things like style of worship or paint color).

In Revelation chapters 2 and 3, Jesus tells the apostle John to write his message to seven churches in Asia. His message is very similar to the prophetic messages of the Old Testament: identifying their sins and warning them to either repent or face consequences of his judgment on the church. Judgment begins with the family of God (1 Peter 4:17). Today the church is the embodiment of Christ, and he expects us to act like it. So we read the Prophets to find out what acting like God’s people looks like.

As members of a local and universal church, we are part of the solution. The prophets show us a lot about the attitudes and actions that he wants from his people who are purposed to image him to the world. They show us that God refuses to be replaced by idols in the hearts of his people. So as we read these books, we must consider where we have strayed from complete loyalty and love of God in a personal way. Yes, God will forgive us individually, but we need to repent of our sins. If not, he may discipline us for them, especially when we have been warned (Hebrews 12:5-13).

God has always held leaders to a higher accountability for the acts of his people. Why? Because their influence affects everyone else. As the Jewish kings went, so did the people (1st and 2nd Kings and 1st and 2nd Chronicles). The kings who faithfully followed God led the people to do so, but those who worshipped idols drew the people into idolatry. The priests who failed to faithfully teach God’s Word led the people astray. The prophets who weren’t speaking God’s words gave approval to what God disapproved, giving the people license to sin.

The greater your influence and voice in the church, the more you are held accountable and the greater your need to heed the prophets and apply what is said to leaders (for example, James 3:1).

Finally, the prophets address warnings of judgment to nations other than Israel. When they do, we need to consider how their message parallels our own nations.

“The Hebrews used parallelism in poetry and prophecy as a literary technique to emphasize a particular thought.”2 These provide comparisons and contrasts that make a point.

“Unlike prose, which addresses historical realities more directly, poetry draws its readers and listeners into spiritual realities with the use of evocative language.”

The ESV Study Bible describes this as “the exposure of human vice or folly” and its elements as 1. an object of attack, 2. a satiric vehicle, 3. a satiric norm, and 4. a satiric tone.4

When did the Prophets write?

The books of prophecy were written by those sometimes called the Classical Prophets. Other prophets like Elijah, Elisha, and Nathan, along with others less well-known, are mentioned in the historical books, but no written collection of their messages exists.

Although we often think of the prophets as common figures in the Old Testament, there were specific periods of time during the classical period when their messages were clustered as outlined in the IVP Bible Background Commentary: Old Testament:5

1. the Assyrian crisis that brought the fall of the northern kingdom and the siege of Jerusalem (760-700: Amos, Hosea, Micah, Isaiah)

2. the Babylonian crisis that brought the fall of Assyria and the fall of Judah and Jerusalem (650-580: Habakkuk, Zephaniah, Nahum, Jeremiah, Ezekiel)

3. the postexilic period with its Persian rule and identity crisis (530-480: Haggai, Zechariah, Joel, Obadiah, Malachi; Daniel could be counted among these, although he served during the exile)

FYI: Jonah is a precursor to the Assyrian Crisis, so our study considers it first.

The chart on the following page will help you keep the prophets’ messages in context. 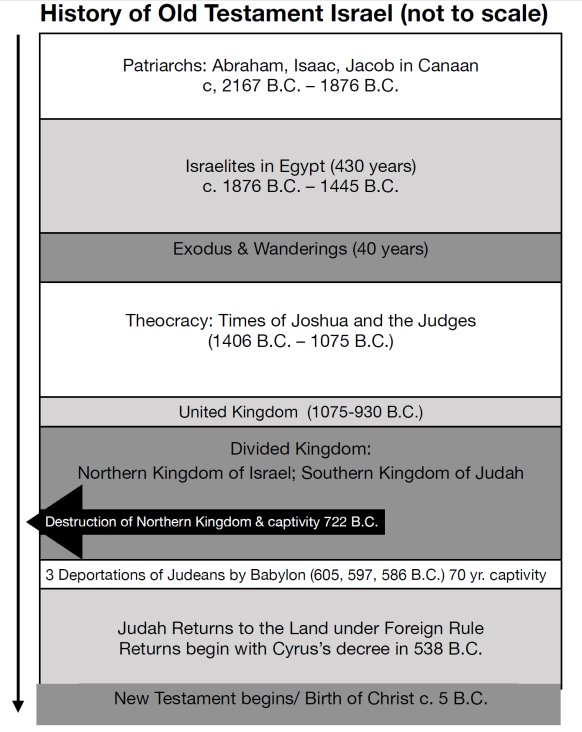 6 Thank you, Kay Halligan, for your invaluable help in producing this chart.

From the series: An Anchor for the Soul: A Journaling Study of the Minor Prophets PREVIOUS PAGE | NEXT PAGE

Kay is a life-long Texan who loves to teach the Bible and develop women as servant-leaders. She is the Founder and Executive Director of Beyond Ordinary Women Ministries, which offers online free or low cost resources to prepare Christian women for leadership (beyondordinarywomen.org) Kay spent t... More