Around the middle of the 2nd millennium, a new people movement begins to take place. This time it is the Indo-Europeans. Between 2000 and 1750 B.C., not a single non-Semitic name appears south of Carchemish; they are either Canaanite or Amorite. In the period 1500-1300 B.C., Syria and Palestine swarm with non-Semitic names1 These Indo-Europeans spill into the Middle East arena from the northwest (Hittites), north (Hurrians) and east (Kassites). These groups have in common (1) an origin in the mountains surrounding the Fertile Crescent, (2) a common Indo-European stock and (3) the possession of horses and chariots which gave them the edge in their encounters with the residents of the valley.

The attack on Babylon by the Hittites in 1595 B.C. brought the first dynasty of Babylon to a conclusion and allowed the intrusion of an Indo-European people from the Zagros mountains.

The Kassites completely adopted the culture and writing of the conquered people. They never put their own language into writing. For about 400 years they controlled southern Mesopotamia. So little is recorded about them that scholars have tended to dismiss them as a mediocre people. But they must have been able to bring about peace and stability. They apparently had a military state and feudal organization.2

The movement of the Amorites from the Syrian steppes observed in Unit V was countered by the penetration of the Hurrians from the northeast out of the mountains surrounding the Fertile Crescent. The Amorites controlled the Mesopotamian valley, but Hurrian influence was being felt as early as the first dynasty of Babylon in some of the northern areas.3

This long period of infiltration is followed by settlement and conquest of the “hill country” north of the Euphrates permitted by the fall of Mari and the failure of Hammurabi to extend his control into that area. Finally, the regrouping of these petty states resulted in the establishment of Mitanni, a kingdom which would play a vital role in Middle East history for 150 years.

There appears to have been an Indo-Aryan segment of Hurrian society which, as a special class who were noted for training of horses and chariotry warfare, dominated the Hurrians. These were called mariyanna.

Mitanni was at first hostile to Egypt, but the common threat of the Hittites brought them together. Under Amenhotep III, extensive correspondence and trade were carried on. Mitannian princesses joined the Pharaoh’s harem.

The Mitannian Kingdom is brought to a conclusion by the Hittites around the middle of the 14th century B.C.

A. H. Sayce wrote in 1902: “We are told in the Second Book of Kings (vii. 6) that when the Syrians were encamped about Samaria and the Lord had sent a panic upon them, ‘they said one to another, Lo, the king of Israel hath hired against us the kings of the Hittites, and the kings of the Egyptians, to come upon us.’ About the year 1843 a distinguished scholar selected this passage for his criticism. Its ‘unhistorical tone,’ he declared, ‘is too manifest to allow of our easy belief in it.’ ‘No Hittite kings can have compared in power with the king of Judah, the real and near ally, who is not named at all…nor is there a single mark of acquaintance with the contemporaneous history.”4

The Hittites are referred to as Heth in the Table of Nations and descendants of Ham. Hittite, properly speaking, should, therefore, be applied only to the original inhabitants of the Anatolian plateau.5 The Hittite texts reveal that Anatolia in the middle and late bronze ages was populated by a mixture of peoples. The Indo-European peoples must have entered Anatolia sometime during the third millennium, B.C., either by way of the Caucasus or across the Bosporus, since the homeland of these peoples is known to have been to the north of the Black Sea.6

The period immediately preceding the old kingdom had Assyrian trading colonies which were interested in exploiting the mineral-rich Anatolian plateau. These colonies came to an end about 1940 B.C. (ANE 1 #56), possibly by the increasingly influential Hurrians in northern Mesopotamia. An early Hittite prince, Hattusilis, “man of Hattushash” rebuilt the ruined Hattushash and made it his capital. The need for tin caused him to be interested in the Euphrates trade route. He, therefore, began to look to the East. His grandson and successor, Mursillis I, defeated Aleppo, proceeded down the Euphrates and overthrew Babylon itself, bringing to an end the First Dynasty of Babylon in 1595 B.C., (the Kassites then had a free hand). However, the pressure of the Hurrians and other circumstances reduced the Hittite Kingdom once more to a small area in central Anatolia.

The Hittites began to assert themselves again under Tudhaliyas. Thutmose III had begun to penetrate Syrian territory, and the Hurrians had become established as the Kingdom of Mitanni. The Hittites were able to conquer Syria, including Mitanni. When in 1286 B.C., the ambitious Ramases II once again challenged the Hittites by leading an army up from the coast into the interior of Syria, he suffered a surprise attack beneath the walls of Kadesh and was forced, despite great personal valor, to retreat. During the following years, the tense relations between the two great powers gradually improved, and in 1284 B.C., Hattushilish III and Ramases II concluded a treaty of peace by which the demarcation line between the Hittite and Egyptian spheres of influence was fixed just south of Damascus.7

The empire came to a sudden conclusion about 1200 B.C. partly because of the pressure of the “Sea People.” These invaders, about which little is yet known, must have been made up of both Aegean and Anatolian peoples. They cut off the trade routes of the Hittites in the west, were barely beaten off by the Egyptians, and made their way up the coast of the Levant thereby cutting off the east trade routes. As a result, the Hittites, now completely vulnerable, fell prey to the attacks of the north and succumbed to oblivion. After that, evidence of the Phrygian civilization abounds. The Hittites continued in various cities, now affected by the newly emerging Arameans. Hamath of the Bible is a Hittite city. It is the Assyrians who, after three centuries of penetration of the west, eventually bring all of Syria and the Hittite city-states under their control.

The early excavations of Hattushash (modern Bogazkoy) about 1906 brought to light a wealth of clay tablets (some 10,000). These were composed in at least six languages. Akkadian as the international language of commerce and diplomacy was present. Hittite hieroglyphics were the medium of monumental inscriptions.

The Hittites and the Old Testament.

Gurney has problems with the early biblical references to the Hittites (e.g., Gen. 15:23) since there is no extra-biblical evidence of penetration into Egyptian territory (Palestine) by the Hittites at that time.8 It seems to me, however, that the mobility of the people at that time could easily permit this kind of contact even of Hittite people who may not have been under the suzerainty of Hattushash. Cf. also K. Kitchen, who argues that Hittite penetration into Syria in the 19th and 18th centuries B.C. establishes such a precedent.9 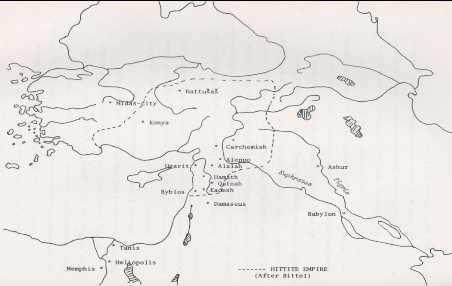 7A cuneiform copy of this treaty can be observed in the Ankara museum.

9The Ancient Orient and the Old Testament, 52. Hogarth, CAH 3:133, says that the Old Testament references that Palestine was once the home of the “children of Heth” must have foundation in fact.