4. The Settlement Of The World, (The Table Of Nations)

Space does not permit an extensive discussion of the table of nations presented in Genesis 10 beyond a general identification of the peoples. Custance (The Three Sons of Noah), an anthropologist, posits an interesting theory on the dispersal of man. The eight point summary of his thesis is as follows:

The geographical distribution of fossil remains is such that they are most logically explained by treating them as marginal representatives of a widespread and in part forced dispersion of people from a single multiplying population established at a point more or less central to them all, and sending forth successive waves of migrants, each wave driving the previous one further toward the periphery.

The most degraded specimens are those representatives of this general movement who were driven into the least hospital areas, where they suffered physical degeneration as a consequence of the circumstances in which they were forced to live [such as the Neanderthal man in Europe].

The extraordinary physical variability of fossil remains results from the fact that the movements took place in small, isolated, strongly inbred bands; but the cultural similarities which link together even the most widely dispersed of them indicate a common origin for them all.

What I have said to be true of fossil man is equally true of living primitive societies as well as those which are now extinct.

All the initially dispersed populations are of one basic stock: Hamitic, the family of Genesis 10.

The initial Hamitic settlers were subsequently displaced or overwhelmed by Indo-Europeans (i.e., Japethites), who nevertheless inherited, or adopted, and extensively built upon Hamitic technology and so gained an advantage in each geographical area where they spread.

Throughout the great movements of people, both in prehistoric and historic times, there were never any human beings who did not belong within the family of Noah and his descendants.

Finally, this thesis is strengthened by the evidence of history which shows that migration has always tended to follow this pattern, has frequently been accompanied by instances of degeneration both of individuals or whole tribes, usually resulting in the establishment of a general pattern of cultural relationships which parallel those archaeology has revealed.1 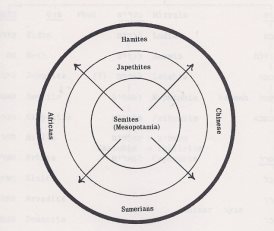 Generally speaking, the Hamites are the most dispersed and diverse people, both ethnically and linguistically. They will be found, according to Genesis, in Asia Minor, Canaan, Egypt (North Africa), South Africa, and Mesopotamia.

Likewise, the Japethites represent the Indo-European peoples, that is, from Europe to India. This classification is usually referring to linguistic similarities rather than ethnic, although the latter is also a consideration. Looking at a relief map of the world, one can see that these people are often mountain people.

Finally, from a biblical point of view, the Semites are the center of God’s work. Semitic people come out of the desert. They are Assyrian, Babylonian, old South Arabians, and, of course, the descendants of Abraham. It is no coincidence that the three great monotheistic religions had their origin among Semitic people.

There is ongoing debate about the identification of all the names listed in the genealogies. Some are quite clear, others are not. Below is a list of all the biblical names in Hebrew and English with notes as to the assumptions about their identity. 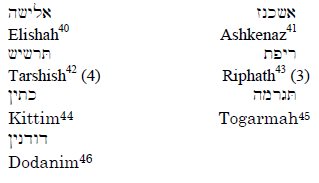 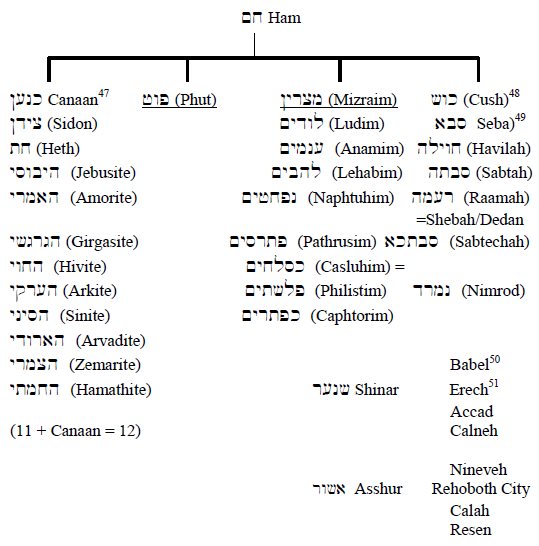 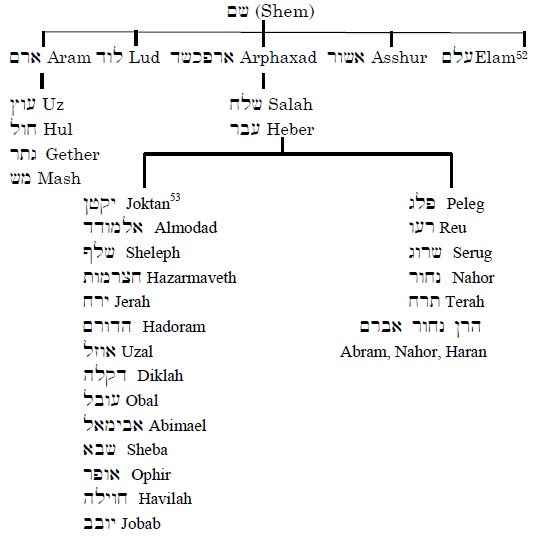 As with many genealogical lists, this one is selective and oriented toward a certain position--namely, the history of Abraham.23 Also in characteristic fashion, the most remote person (Japheth) is dispensed with and the family in the center of interest is taken up last and amplified (Shem and in ch. 11 Terah).

There are numerical considerations. Japheth has seven sons but descendants are listed for only Javan (four descendants) and Gomer (three descendants). The sons and grandsons of Cush total seven (Nimrod is dealt with as a separate entity). Mizraim has seven descendants. There are fourteen members of Yaktan’s family and ten of Shem’s consummating in Abraham (both numbers are favorites in genealogies). There are seven from Heber to Abraham. Canaan and his descendants total twelve which might be used to counterbalance the twelve tribes of Israel.

The descendants of Canaan and Mizraim are treated as peoples rather than individuals, but this is not to deny that an individual headed up the group originally.

The Israelites are linked with Heber (Gen. 10:21) apparently associating the names Heber and Hebrew.

The fact that Cushites (Hamites) are mentioned as the founders of the Mesopotamian cities shows that they must have been pushed out later by Semites (Custance argues that the Sumerians were Hamitic).

The division of the earth into languages probably took place during the time of Peleg (in his days the earth was divided) or four generations after the flood.

Excursus on Nimrod: This text presents a very tantalizing situation. A descendant of Cush became so famous his name was a household word. His very name means “rebellion” and the LXX is an early witness to an interpretation of “before the Lord” (לִפְנֵי יהוה) as “against the Lord” (ἐναντίον). All the cities mentioned are of great antiquity and are referenced in the earliest writing (cf. the Gilgamesh Epic). There is a problem of whether Asshur went out and built cities or Nimrod (or his descendants) went to Asshur and built. The latter is grammatically feasible (although a little unusual) and since Shinar has four cities, then Asshur would be given four to balance it. This would mean Semitic people in Asshur who were influenced by Nimrod.

2U. Cassuto, Commentary on the Book of Genesis: Some link to Turshnoi = Etruscans, but uncertain. Note seven names.

6Medes near the Caspian Sea.

8Ezek. 38:6 (uttermost part of the North). CAH 3:53 says they are barbarians from the north beginning to attack Urartu and Assyria. The Assyrians called them Gimmirrai, the Greeks Kimmeroi. They were located north of the Black Sea.

16Could it be that the story in Genesis 9 about Ham/Canaan was included in the Pentateuch to show the depravity of the Canaanites?

17Cassuto links him to an Arabian tribe south of Israel or Transjordan. Cf. the Cushite woman whom Moses married.

18Cassuto says they migrated south in the 8th century.

21Driver admits that inscriptions point to an early Semitic people in Elam but that the writer of Genesis would not have known that! Book of Genesis, p. 128. Childe, New Light on the Most Ancient East, argues that the very earliest settlers were Semitic Elamites (Al-Ubaid, Jemdet Nasr) who were pushed out by Indo-European Sumerians. Pp. 133-136, 145, 146.

23Cf. Ruth 4 where only five generations are listed for 431 years and Matthew 1 where four kings are omitted. See Kitchen, Ancient Orient and the Old Testament, pp. 35-40.