3.3. The Stewardship of God’s Truth

Multiplying the Life Through Evangelism and Discipleship

The Treasure of God’s Truth

2 Timothy 1:13-14 Hold to the standard of sound words that you heard from me and do so with the faith and love that are in Christ Jesus. 14 Protect that good thing entrusted to you, through the Holy Spirit who lives within us.

In challenging Timothy to guard the message God had given him to communicate to others, the Apostle Paul defined that message as “that good thing entrusted to you” (2 Tim. 1:13-14). Here the Apostle reminds us that this message, the message about the Lord Jesus that brings men into a vital relationship with the eternal God of the universe, is both a treasure and a trust. Obviously the only message that brings men into the kingdom of God, reconciles them to God (John 14:6; Acts 4:12), and gives them eternal life and life more abundant (John 10:10) is truly a treasure beyond measure or a pearl of great value (Matt. 13:44-46). The message of the Gospel is the most valuable thing a person can possess, but as something so intrinsically valuable, it also needs guarding. Why? Because there are many peddlers walking about with a false gospel seeking to pawn off one of Satan’s many counterfeits on a gullible public (Gal. 1:6-9; Jude 3-4).

But while it is to be guarded, it must not be hoarded. Indeed, it is a message that must be shared or communicated clearly and accurately to others. In that sense, it is also a trust entrusted to us to commit to others. So, in 2 Timothy 2:2, Timothy is charged with the responsibility of entrusting what he had learned from Paul to other faithful men who in turn would teach others and so on, and so on.

This is the ministry of spiritual multiplication. Note that there are four generations represented here. Paul to Timothy to “faithful men” to “others also.” This is very simple, but the results are awesome. If you win just one person to the Lord each year and train that person to walk with Christ and become productive himself, and then the two of you do the same thing with two more people (just one apiece) the next year so that you continue to double your numbers each year thereafter. Do you know who many people would have come to Christ after continuing this process for twenty years? By the end of the twentieth year, your ranks will have grown to 1,048,576.137

The Problem We Face

It seems that a lot of people have the idea that making disciples (winning souls and building them in Christ) is a job for only a special cast of people like missionaries, pastors, and youth workers and that their job is simply to support them or pay them to do the work of ministry. There are a lot of things that have led to this like the minister/laymen mentality, but the point is, this is a totally erroneous idea and one that is certainly not biblical. Rather than grasping the concept of every believer a ministering priest (1 Pet. 2:5-10), too many have become simply spectators rather than team players. In other words, 2 Timothy 1:14 and 2:2 give us God’s game plan for the body of Christ and most believers can be involved in this to some degree if they were only available. One of the primary roles of the so-called pastor or the pastor-elders is that of player-coaches who train or equip others to do the work of ministry for the building up of the body of Christ (Eph. 4:11-16).

Ephesians 4:12 does not describe three things that the pastors are to do as the KJV might lead some to believe, i.e., “to equip the saints for the work of ministry, that is, to build up the body of Christ,” The Greek text would be better translated as “For ( pros) the equipping of the saints unto ( eis) the work of ministry unto ( eis) the building up of the body of Christ” (My translation). Paul’s intention is to describe an equipping ministry that develops others with a view to ministry which in turn is designed to produce a body that grows qualitatively (spiritual growth toward Christlike maturity), quantitatively (people coming to Christ), and organically (people being plugged into ministries—elders, deacons, teachers, etc.).

Becoming good stewards of the treasure of God’s truth is not just something for a special few, but a calling for all of us as believers in Christ.

After the death, resurrection, and ascension of Christ and the coming of the Spirit of God at Pentecost, what happened to the church? It grew by leaps and bounds and with great power. The events are recorded for us in the book of Acts. At first we see just the 11 disciples gathered with the Lord, then 120 in the upper room, then 3000, and shortly after that, the Lord added 5000 more to the church.

The growth of the church did not stop there. Through the centuries, the Church of Jesus Christ has continued to grow, and the awesome thing is it has grown among alien cultures, among hostile religions, and among both primitive and cultured and educated peoples. With this growth all over the world, the church has grown and triumphed in spite of traitors, apostasy, persecution, famine, sword, Bible burnings, the lions’ den, burning at the stake, and you name it.

As the Lord Jesus said in Matthew 16:18, “And I tell you that you are Peter, and on this rock I will build my church, and the gates of Hades will not overpower it."

It is evident that the Church has grown in many different ways, but as Wyn and Charles Arn point out, “… there has always been one way it has grown better, faster, and stronger than any other. From its beginning, through the centuries till today, one unique way has been more responsible for the Church’s growth than any other. It is about this way—and the important implications it has for you and your church”138 that this series on evangelism or making disciples, the great mission of the church, is all about.

The mission for the church has not changed. The mission given to the early church is still the mandate for the church of the twentieth century. Yet things are not well even though the potential for evangelism and discipleship world-wide has never been greater. Around every church and Christian home in every community, there are winnable people just waiting to be won. But, how well do we understand our mission, the means available to us, and the biblical method that works so well, but is so often ignored?

Statistics tell us that only about 7% of the church are trained to do the work of evangelism and only about 2% are actually doing the work of evangelism. Two men who have considerable experience in evangelism and discipleship and who have traveled all across America conducting seminars, holding consultations, conferring with church leaders and laity, and feeling the pulse of America are Wyn and Charles Arn. In their book, The Master’s Plan for Making Disciples, they point to a number of characteristics that mark the church in America.139

(1) “Reaching non-Christians is a low priority for most congregations and individuals.” What was once the heartbeat of the early church has diminished enormously as a priority in the minds of most Christians.

(2) “The biblical concept of ‘lostness’ has disappeared from the conscience of most churches and most Christians.” We have lost the sense and burden of Jude 23, “others save, snatching them out of the fire.”

(3) “Most evangelism methods are relatively ineffective in making disciples.” Local congregations often “import a program or formula that has seemingly been successful, but in reality, these programs are only short lived. They too often involve a 15-minute Gospel presentation under artificial conditions with little knowledge of the person or consideration of their unique needs” (p. 9). Such approaches tend to see people as notches on the handle of their gospel gun. Such approaches often lead to keeping score.

(4) “Evangelism focuses more on decision-making rather than on building relationships and discipleship-making …” That brief verbal commitment is seen as the ultimate response to the Great Commission. Unfortunately, there is often a great gap between ‘getting a decision’ and ‘making a disciple.’

(5) “Making disciples is interpreted only or primarily as spiritual growth,” but too often it’s a growth that is self-centered and lacks certain elements that are essential to true biblical maturity, namely teaching people to reproduce themselves in others as disciple-makers themselves.

(6) “Evangelism methods are too often simplistic.” They rely too much on canned presentations rather than on building relationships and caring for people as individuals (lifestyle evangelism) that builds bridges to the Gospel by genuinely loving people.

(7) “Evangelism is much discussed, but little practiced.” It is a part of the doctrinal statement or on the bulletin, the subject of seminars, and videos, but it’s not really a part of the lifestyle of the average believer or member of the congregation.

So, what’s wrong? With the greatest message in the world, a message that gives life in place of death, why are we failing to spread the good news and fulfill the Great Commission? Clearly the church needs training, but more importantly it needs the right motivation to become the people it was called to be, a people proclaiming the excellencies of our God and salvation in Christ. 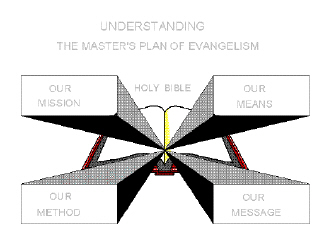 Using God’s Word as the source for discovering the Master’s plan and with the hope of becoming a means of motivation, challenge, and instruction, this series on evangelism will fall into four major categories:

Though one of the great thrusts of these next few lessons will be on evangelism, it is not just a series on evangelism. To limit it to evangelism is to miss the complete mission of the church and perhaps leave us with the impression that our goal here is to enlist everyone for a program to train a team of people to go out and knock on doors with a canned evangelism approach. As it has just been pointed out, this is part of the problem.

J. Hampton Keathley III, Th.M. was a 1966 graduate of Dallas Theological Seminary and a former pastor of 28 years. In August of 2001 he was diagnosed with lung cancer and on August 29th, 2002 he went home to be with the Lord. Hampton wrote many articles for the Biblical Studies Foundation and on... More