3. Writing: A Permanent System Of Communication

The ability to communicate in a permanent manner caused radical changes in the culture of the Middle East. People were now able to transmit information to succeeding generations in written as well as oral form. This included divine revelation as well as other more mundane matters.

It was the medium of clay which determined the nature of writing in Mesopotamia. Figures at first were drawn, but it was discovered that the end of the stylus pressed in the clay made easier and clearer impressions. This wedged shaped writing is thus called cuneiform (Latin: wedge-shaped), or in German, Keilschrift.

Cuneiform was apparently developed by the Sumerians, an unknown people in the southern part of the Mesopotamian valley. They and their language were probably Asian in origin.2

Around the third millennium B.C., a Semitic people began to intrude into the valley, finally dominating the Sumerians completely. They adapted the cuneiform writing system to their own language which is referred to as Akkadian. The later dialectical developments of this language are referred to as Assyrian and Babylonian.

Because of commercial exchanges with the west, cuneiform Akkadian has been found in Egypt, Anatolia and Syria.

The Egyptians have writing on their monuments by 3200 B.C. These are called “holy incisions” or hieroglyphs. Gelb argues that Mesopotamian influence in Egypt c. 3000 B.C. suggests that the Egyptians learned from the Sumerians.3

Like Sumerian, this was pictograph writing, but unlike Sumerian, it was not reduced to a syllabary. The hieroglyphs are divided into sound signs or phonograms used purely for spelling (some of which stand for a single consonant) and sense signs or ideograms which depict an object or ideas connected with an object.

Cartouche of Khufu (Cheops), the great pyramid builder. The symbols outside the cartouche are translated “King of Upper and Lower Egypt.” This symbol was used by all the Pharaohs even during Greek and Persian times.

There were over 600 hieroglyphs. They contained 24 phonetic one-letter signs which do not differ greatly from the alphabet of the Semitic languages.

The hieroglyphs never evolved into an alphabet, but a cursive, simplified form was developed called hieratic which was further simplified after the 7th century B.C. into demotic.

An alphabetic system of writing Egyptian came with the adaptation of the Egyptian language to the Greek alphabet to which were added needed symbols. This is called Coptic.

The Rosetta Stone, discovered by one of Napoleon’s soldiers in 1799, contained an edict from the third century B.C., written in hieroglyphic, demotic, and Greek.

The alphabet itself was left to be developed by people in Palestine. In the Sinai peninsula, the Egyptians mined turquoise. They utilized Semitic slaves for this task. In 1904-5 Flinders Petrie discovered certain inscriptions on the walls of the caves and pits in which the slaves worked. The writing was obviously an ancestor of the Phoenician and Hebrew alphabet. These letters are easily discernible in the picture in ANEP, #270. lb[lt means “to Baalat,” a goddess of the Canaanites. Albright originally dated this around 1800 B.C. but has since reduced it to about 1500 B.C. at the latest, but its development must antedate that considerably.

Precisely who developed this alphabet and when remains shrouded in mystery, but its possible connection with the Egyptian hieroglyphs has been shown. It also is a form of pictograph writing with this exception: the object represented in the symbol gives its initial sound to that symbol so that it can be used over and over again as a sound rather than a representative of one object.4 For instance, a represents an ox. The Semitic word for ox is aleph. However, a no longer means “ox,” but “a.” Likewise, [ is “eye,” (Semitic aayn), but it comes to represent “aa” as in Baalat above.5

This alphabet became refined in its shapes to the point that some of the original objects are no longer discernible. The old Phoenician, Aramaic and Hebrew inscriptions used the following alphabet:

Some of this writing appears at Qumran for the purpose of archaizing. For instance, the divine name is written

Somewhere around the eighth century, through their commercial contact with the Phoenicians, The Greeks adopted and adapted this alphabet. For example, a is turned clockwise one half turn and written “A.” The Greeks wrote originally from right to left as did the Semites.6 Sometimes they wrote boustrophedon (as an ox plows) right to left and left to right. Eventually they wrote only left to right.

In view of the fact that not all letters corresponded, certain improvisations had to be made. Note the following comparison:

From Greek, of course, the alphabet spread to Latin, and its descendants. Hence, every alphabet in the world with the exception of Korean (c. A.D. 1500) owes its origin to the Semitic alphabet developed in Palestine.7

Since there were no vowels in the alphabet, each ethnic group using this alphabet had to come up with vowels. Syriac, e.g., uses Greek vowels over and under the letters. Arabic uses small slash marks and Ethiopic builds tiny vowels into the letters. Greek, itself, used existing Semitic letters for vowels (see above).

The alphabet used in the Hebrew Old Testament is not the old Hebrew but a development of that same alphabetic script by the Aramaic speaking people. The Jews adopted this alphabet during the Babylonian captivity and are using it to this day. It is referred to as the “square script.”

In Syria a place called Ras Shamra (ancient Ugarit) has yielded a treasure trove of tablets coming from c. 1400 B.C. These tablets are inscribed on clay with a stylus attesting their indebtedness to cuneiform, but they are alphabetic not syllabic. We assume the alphabet was borrowed from the Canaanites because of the shape of some of the letters, e.g.,

“We must again emphasize the fact that alphabetic Hebrew writing was employed in Canaan and neighboring districts from the Patriarchal Age on, and that the rapidity with which forms of letters changed is clear evidence of common use. It is certain that the Hebrew alphabet was written with ink and used for everyday purposes in the 14th and 13th centuries B.C. (Lachish, Beth-Shemesh, Megiddo), that quantities of papyrus were exported from Egypt to Phoenicia after 1100 B.C. (Wen-amun), that writing was practiced by a youth of Gideon’s time (early eleventh century), that it was known in Shiloh before 1050 B.C., that several examples of writing from Iron I (cir. 1200-900 B .C.) have been found in Israelite Palestine, and that David had a staff of secretaries. In the light of these facts, hypercriticism with regard to the authenticity of much of the material preserved by P is distinctly unscholarly, and its independent attestation of facts given by J and E is a valuable guarantee of their historicity. It is even less likely that there is deliberate invention of ‘pious’ forgery in P than in JE, in view of the well attested reverence which ancient Near-Eastern scribes had for the written tradition (see above, p. 77).”8

Sumerian is the oldest pictographs. All others seem full-blown from the beginning (indication of adoption).9 Their initial use was during foreign influence.10 There is a good possibility of monogenesis of writing.

Is there a monogenesis of language? Colliers Enc. XII, p. 141. Italian scholar Trombetti--yes, but it cannot be proved or disproved. Complete differences do not disprove it. (Once Indo-European relationship was not understood.) 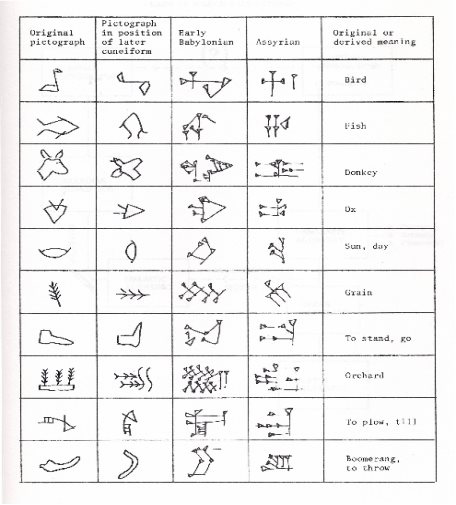 From Pictography to Syllabic Writing

After Contenau, Everyday Life in Babylon an Assyria 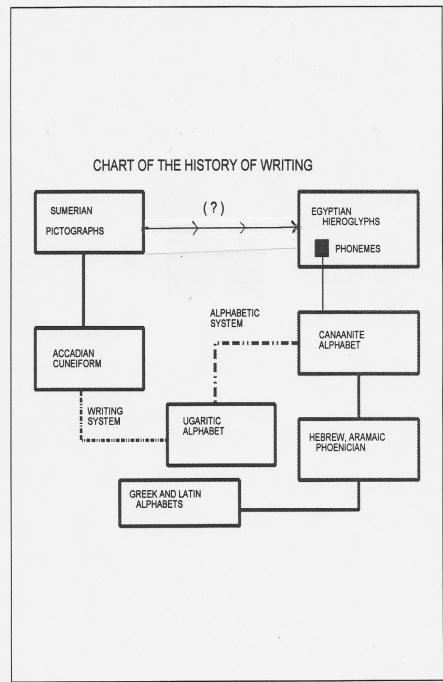 3Amahai Mazar (Archaeology of the Land of the Bible 10,000-586 BCE., p. 105) says, “Sumerian influence on Egyptian culture was considerable during the Late Gerzean and Archaic periods in Egypt. These international relations during one of the most creative periods in the history of the ancient Near East may indicate movements of people over long distances—both by land, from Mesopotamia westward through Syria to Palestine and Egypt, and by sea, connecting Elam and southern Mesopotamia with Egypt around Arabia. Within this general framework, close though short-term connections between Egypt and southern Palestine in EB I [3300-3050] are of particular significance.”

5See Orly Goldwasser “How the Alphabet Was Born from Hieroglyphs,” BAR, March/April 2010 and Rainey’s response to her.

6Harris thinks it might be because of inscriptional use (Z. Harris. A Grammar of the Phoenician Language, p. 11).

7Jonathan Tubb, Canaanites, p. 146, “If an enduring tribute to the Canaanites is needed then it is surely the printed text of this book …The letters used may look very different from those devised in the second millennium BC, but the process of their usage, the alphabetic system, remains as the towering achievement of the Canaanites.”