24. Qumran And The Intertestamental Period

The general background on the finding of the scrolls in 1947 can be read in any introductory work. J. C. Trevor, who photographed the large Isaiah scroll in 1948 tells his version of the story in The Untold Story of Qumran, Westwood, NJ: Revell, 1965.

The initial discoveries took place in the caves of Wadi Qumran (a wadi is a dry gulch through which water runs as a torrent during the rainy season). Khirbet Qumran (Khirbet means “ruin”) is the site of a settlement which was excavated by the archaeologist after the scroll finds.

The scrolls were found in the following areas: The Eleven Qumran caves, Wadi Murabba’at (2nd c. A.D.), Desert caves south of Ein Gedi, Masada. Excavated by Yadin and published with that title (Masada), Khirbet Mird (Christian monastery at this place). If anything is New Testament it will be here (c. 500 A.D.).

There are two distinct aspects of Qumran to be considered: (1) The Essene sect and NT backgrounds and (2) the biblical text as represented at Qumran.

Who are the Qumran sectaries?

The reasons for the linkage are (1) Josephus mentions three major groups within Judaism (Pharisees, Sadducees, and Essenes). If these people are not Essenes, there is another major, unidentified group. (2) The similarities between Josephus’ description and what is found in the writings is too striking to be coincidental.

Josephus first mentions the Essenes in the period of Jonathan Maccabaeus around 150 B.C. He refers specifically to an Essene called Judas in the time of Aristobulus I (105-104 B.C.). His last mention is of a certain John the Essene who joined the war against Rome.2

The reconstruction of their history varies with the scholars. Part of it depends on how one is to interpret “Damascus.” Dupont-Sommer believes it is to be interpreted literally, and that the group fled to Damascus to avoid persecution by the hostile priesthood in Jerusalem linked with the Hasmoneans.3 Cross, on the other hand, leans toward a view that “Damascus” is a “prophetic name” given to Qumran based on Amos 5:25-27.4

While there continue to be many differences of opinion on the reconstruction of the history of the sect at Qumran, Dupont-Sommer’s hypothesis is as follows:

The basic events described in the Commentary on Habakkuk and The Damascus Document took place in the first century B.C.

The Teacher of Righteousness began his ministry towards the end of the second century B.C.

In the conflict between Hyrcanus II and Aristobulus II (67-63 B.C.), persecution was directed against the sect.

In that persecution, the Teacher of Righteousness was condemned and executed and the sectaries, shortly before the capture of Jerusalem by Pompey (63 B.C.), fled to the land of Damascus.

This Damascus exile lasted during the whole of the priestly rule of Hyrcanus II (63-40 B.C.).

The sect then resettled in Judaea and in particular in Qumran.

After about a hundred years, at the time of the great Jewish War (A.D. 66-70), the Essenes again left their home in Qumran after hiding their sacred books in the nearby caves.

The “Kittim” in the writings refer to the Romans. The Wicked Priest is John Hyrcanus II, who eventually was backed by the Romans, but was led into captivity by the Parthians.5

Some of the ideas of the sect

There was a priest messiah and a king messiah (1QS 9:11; 1QSannexe 2:11-22). This reflects a similar idea in the Old Testament of Moses/Aaron; Zerubbabel/Jeshua. 1QS 9:11 speaks of the messiahs of Aaron and Israel. This is similar to the theology of the Testament of the Twelve where the priestly messiah is from Levi (Levi 18; Judah 24; cf Sim. 7:2; Levi 2:11 and especially Judah 21:2-5).

A fragment containing teaching about Melchizedek (11QMelch) sheds light on the community’s views about this Old Testament personage.7 The Melchizedek of Qumran is a chief of sons of heaven and is referred to as אלהים and אל (Elohim and El). Some link him with Michael the archangel (Schürer) but others are less positive (de Jonge and van der Woude). See the latter two authors in the article referred to in the footnote for a very stimulating discussion about the identification of this individual and the relationship of that teaching to the New Testament. See also Fitzmyer’s bibliography on this fragment (two pages).

“The Qumran sect was not a small ephemeral group. Its substantial community at Qumran persisted some two centuries or more. Moreover, it was not restricted to Qumran, but, as we know from its documents, counted its camps and settlements in the villages of Judah. Its own sectarian literature is enormous, and of profound and direct influence on Jewish Christian and Christian movements of the first century A.D. and later.”8

What influence did the Essenes have on Christianity?

Dupont-Sommer’s statement on this issue bears quoting. “It should be said at once that for the historian who considers the subject with the necessary broad-mindedness and serenity, this sect is undoubtedly representative of one of the most lofty and fruitful mystical movements of the ancient world, and is certainly one of the glories of ancient Judaism. On the other hand, although the Essenes, more than any other Jewish movement, were privileged to prepare the way for the institution of Christianity, the latter’s originality remains impregnable despite the affinities and borrowings which the new texts reveal.”9

He later points out that John the Baptist had his origins in the desert; that Jesus was linked with John and also was tempted in the desert. He also believes that the Teacher of Righteousness linked himself with the servant songs as did Jesus. He argues that, in spite of the originality of the new Messiah, “…the primitive Christian Church was rooted in the Jewish sect of the New Covenant, the Essene sect, to a degree none would have suspected, and that it borrowed from it a large part of its organization, rites, doctrines, ‘patterns of thought’ and its mystical and ethical ideals.”10

At the same time he points out six differences between Jesus Christ and the Teacher of Righteousness that prevent any confusion between the two men.

The TR was a priest of the tribe of Levi.

The TR exercised his ministry essentially in Judaea.

The TR was so superstitiously venerated that the disciples would not utter his name.

The TR was a severe ascetic, charitable no doubt, but hard on himself and others. Regarded all contact with sinners as defilement.

The TR was the exponent of a mysterious Gnosis elaborated with the help of the highest wisdom then circulating in the world and reserved for initiates; Jesus was a popular preacher, sprung from humble people and expressing himself in simple language with comparisons full of freshness and life.11

A quote from Beckwith is appropriate here in connection with references to pseudepigrapha by the NT writers: “If however, one links Christianity, not narrowly with Essenism, but more broadly with the apocalyptic and prophetic movements active in the first century (of which Essenism was an important example), one comes near to an answer…”12 “But though the Epistle of Jude may at first have played a part in popularizing the Pseudepigraphy, was it the author’s intention to do so? One may reasonably doubt whether it was. For, though his book has strong links with other New Testament books, his is the only one to make distinct reference to this kind of literature. There was evidently no general desire among the leaders and writers of the apostolic church to popularize such literature. Even the Revelation, which is itself an apocalypse, owes only very intangible debts to the pseudonymous apocalypses.”13 Beckwith rejects the idea that where the NT writer quotes a pseudepigraph that quote is an indication of the historicity of the item. He prefers to argue for a use of haggadic material to make a point.14

Materials from the Dead Sea Area

The customary sigla are based on the source of the piece (Cave 1, Qumran, e.g.) and the contents. 1QIsaa, e.g., means the first scroll of Isaiah from cave 1 at the site of Qumran.

The Eleven Caves of Qumran

The most important find was a copper scroll published in DJD. It listed over 200 tons of treasure.

This is the most important of all the caves. Tens of thousands of fragments were found. 382 MSS have been identified. About one-fourth are biblical. All the books of the Hebrew canon except Esther are represented.

There were significant but minor fragments from biblical books (see DJD, III).

Practically nothing was left because of collapse and erosion.

Here was found the beautiful 28 column MS with two thirds of the height of each column preserved (11QPsa). It comes from the early first century A.D. and contains parts of 35 canonical Psalms and eight other compositions. It was published by J. A. Sanders in DJD, IV.

The principle find here was a copy of a Hebrew Ecclesiasticus.

Fragments of this work were found many years ago in a Cairo geniza. They have now been linked through other fragments at Qumran with the Essenes. “This Jewish sect of the Covenant which, driven out of Judaea by Persecution, sought refuge in the region of Damascus and remained there for a certain time before returning to its own country. Convinced that the Teacher of Righteousness, whom the High Priest had put to death, would return at the end of time, his disciples regrouped and reorganized themselves, and settled in their land of exile to await the great Day of God’s supreme Visitation.”20 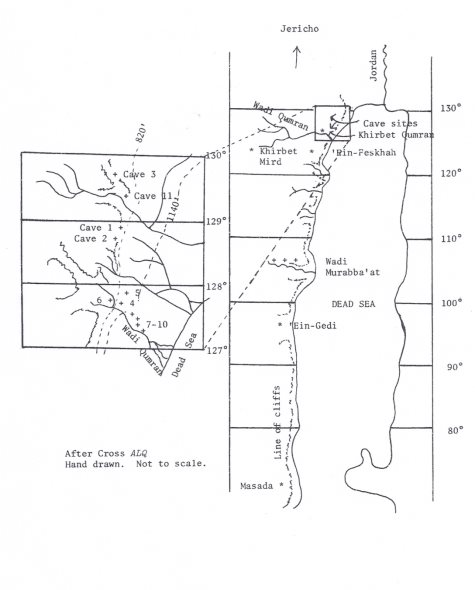 6See Emil Schürer, The History of the Jewish People, 2:550ff for a discussion of these issues.

17Cross, ALQ, p. 43. N.B., if Daniel was composed in the 6th century B.C., as evangelicals believe, this statement would not be required.