“When Cyrus entered Babylon in 539 B.C., the world was old. More significant, it knew its antiquity.”1

“The story of the ancient Orient is drawing to its close. And yet, by a strange contrast, on the very eve of the final crisis it achieves its maximum extension, unification and power. Up to and beyond its boundaries, from India to Libya, a single empire is built up from diverse peoples, and the synthesis which had existed momentarily under the Assyrians now becomes a stable condition, reinforced by an enlightened policy of liberality and tolerance.”2

The chief actors in this new phase of history are Indo-Europeans, known to be present long since on the Iranian plateau, but who form strong political organisms only during the first millennium.

The prologue to the new chapter of history is provided by the empire of the Medes, who are of Iranian stock and closely related to the Persians. In the seventh century B.C., they established a powerful state and, under king Cyaxares, defeated Assyria and penetrated into Armenia and Anatolia, checked only at the river Halys by the resistance of the Lydians (along with Nabopolassar).3 The empire disappeared soon after its rise. In the middle of the following century, Cyrus’ Persians threw off its yoke, took over the power and set out along the open road of expansion (note maps for Median expansion alongside the Neo-Babylonian Empire). The ancient name Hakhamanish or Achaemenes becomes the dynastic title and the Persian rulers are henceforth known as the Achaemenids.

The story of Astyages, king of the Medes who married his daughter to an unimportant Persian (Cambyses I--a king but under Median thumb) is recounted by Herodotus.4 Of this marriage was born Cyrus who was destined to death by Astyages (because of a dream that his daughter gave birth to water which flooded the world) but was kept alive by a herdsman. Harpagus had been assigned the task of killing the child, and when Cyrus grew up, Astyages discovered him, cooked Harpagus’ son, and fed him to him.

Cyrus became king of Anshan in 560 or 559 B.C.,5 made his move against the Medes in 550 B.C., and Harpagus deserted to his side. “Ecbatana was captured, and its wealth of gold, silver, and precious objects was carried off to Anshan.”6

Cyrus became the ruler of the Medes and the Persians and conquered an empire that stretched to India in the East and to the western edge of Anatolia. This vast empire, with its disparate peoples could only have come about through a policy of the Persians that differed immensely from their predecessors. Cyrus allowed a measure of local autonomy and allowed the return of various gods, the rebuilding of temples, and the recognition of local cultures. Isaiah (40-45) tells us that God raised him up as his anointed (Isaiah 45:1-2). The Jews benefited from the policy in that they were allowed to return to their land, rebuild their temple, and restore their worship system. 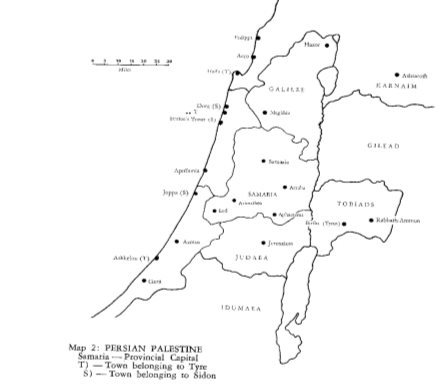 The decree of Cyrus, found on the Cyrus Cylinder is as follows: “All the kings of the entire world from the Upper to the Lower Sea, those who are seated in throne rooms, (those who) live in other [types of buildings as well as] all the kings of the West land living in tents, brought their heavy tributes and kissed my feet in Babylon. (As to the region) from…as far as Ashur and Susa, Agade, Eshnunna, the towns Zamban, Me-Turnu, Der as well as the region of the Gutians, I returned to (these) sacred cities on the other side of the Tigris, the sanctuaries of which have been ruins for a long time, the images which (used) to live therein and established for them permanent sanctuaries. I (also) gathered all their (former) inhabitants and returned (to them) their habitations. Furthermore, I resettled upon the command of Marduk, the great lord, all the gods of Sumer and Akkad whom Nabonidus has brought into Babylon to the anger of the lord of the gods, unharmed, in their (former) chapels, the places which make them happy.”7

Three major military expeditions (in addition to the many minor ones) were necessary to bring this about (note the three ribs in the Bear in Daniel’s vision--ch. 7). The Lydian campaign began in 547 B.C. when Croesus moved to take over the part of the empire left by the now defunct Medes. Cyrus moved west to interrupt this action and forced the old Assyrian/Median groupings to submit to him. He defeated Croesus in the winter of 547 even though he had called on his allies the Babylonians and the Egyptians to help him. Cyrus also began the process of forcing the Ionian Greeks to submit to him as well.8

The capture of Babylon took place some eight years later. The reason for the delay is not clear. Since the Greek sources talk about his developing a number of canals north of Babylon (with which Herodotus says he diverted the Euphrates river to allow him to invade Babylon), some argue that he was developing irrigation projects while waiting for Babylon to fall into his hands.9 Sippar fell on 10 October and Nabonidus fled to Babylon where he was captured when the Persian forces entered the city. Cyrus himself entered on 29 October, 539 B.C., and the Babylonian territories became Persian thereafter. These territories comprised the “Abarnaharia” satrap including Syria and Palestine and thus the Jews. Cyrus’ son Cambyses was appointed the king of Babylon. Cyrus was killed in a campaign of 530 B.C., and his son Cambyses became king in his place.

Some identify him with Darius the Mede (Dan. 5:31ff), since he ruled Babylon under his father, but that is not likely.10 Cambyses as the King’s son “took the hands of Marduk” in 538 B.C. and was called king of Babylon.11 Cook believes that Cambyses irritated the priests at Babylon and that he was not king again until 530 when his father went to the battle in which he was killed.12 But Olmstead says he ruled as governor the entire time.13

Cambyses began the Egypt campaign in 526 B.C. (the third major thrust) and conquered all Egypt in 525 B.C. Darius was a spear bearer in Cambyses’ army, and Cook argues that he may have been moving in the highest circles at that time.14 Amasis the resourceful pharaoh died as Cambyses began his campaigns and the Greek mercenaries deserted to Cambyses. The new pharaoh was defeated in the delta and at Memphis. Cambyses became the king of upper and lower Egypt. He campaigned further south, but it is difficult to sort out malicious rumor and legend from the truth.

In Cambyses’ long absence, there was usurpation back home. The details are conflicting and confused. Cambyses’ manner of death is disputed. He died in Syria in 522, some of the Greek sources say due to a wound suffered when he fell on his dagger. There is confusion in the empire during this time, and the details are hard to determine. Darius, whose vested interested in the story clouds his reliability, claims that a usurper had pretended to be Cambyses’ brother, Bardyia (the Greeks called him Smerdis), had taken over the throne and was killed by Darius and/or the nobles. It may be that Bardyia had indeed taken over the throne in the extended absence of Cambyses and was killed by Darius who was an officer in the army.15

Darius the Great was the great imperialist, noted for the Behistun inscription.16 He is mentioned by Ezra (he was not a direct descendant of Cyrus but of royal blood). Darius immediately faced rebellion in the empire. After much bloody fighting, he succeeded in establishing his rule. This was accomplished by 520 B.C. He claims that he fought nineteen battles and took captive nine kings in one and the same year.17 It was in this year that Zechariah began his ministry (Zech. 1:1). The entire world was at peace, but Israel was unhappy. Work on the temple was resumed in 520 B.C., and the Cyrus decree was found in Ecbatana (they first looked in Babylon--Ezra 6:1-2), the temple was finished in 516 B.C. twenty years after it had been started. The Persian wars against the Greeks began in 492 and continued under Xerxes. Darius was defeated by the Greeks at Marathon in 490 B.C. Egypt revolted four years later and Darius died as he was setting out to put down the revolt.

This is the mad king who in a mighty combined operation sought to avenge Marathon, and whom the Greeks defeated at Salamis (480 B.C.) and Plataea (479 B.C.). The feast and assembly of Esther 1:3 is plausibly equated with Herodotus 7:8 (the king pays attention to his harem), while Esther 2:16 may be a reference to the events of Herodotus 9:108, 109, according to Blaiklock. [Xerxes wanted the wife of a friend but refrained from taking her. He brought her daughter to the palace and married her to his son, but took liberties with her himself. Through a series of events, his wife learned of it and mutilated the mother of the girl (Herodotus).]

It was this monarch who permitted Ezra to go to Jerusalem to restore the affairs of the Jewish community (Ezra 7, 8) and who promoted the mission of his cup-bearer Nehemiah thirteen years later.18

Zoroastrianism: Zarathustra (Zoroaster) was the prophet of the god Ahura-Mazda. Replaced by Mithra (divine youth with solar halo) and Anita (Persian Aphrodite). 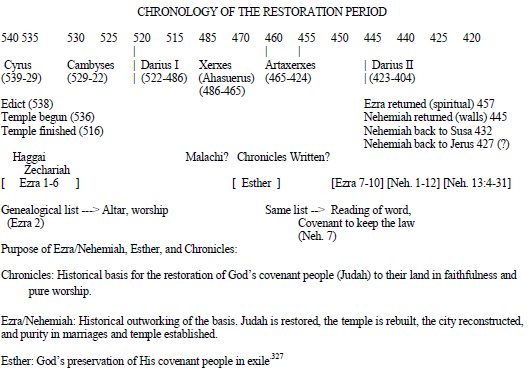 4A. de Sélincourt, The World of Herodotus, pp. 207-10 and Herodotus, The Persian Wars, Clio 1:101ff, Translated by George Rawlinson, available on line at http://www.pars times.com/history/Herodotus/persian_wars/clio.html

10Wiseman, et al., Notes on Some Problems in the Book of Daniel.

16The Behistun inscription in Old Persian, Elamite, and Babylonian, is an “autobiography” of Darius. For a discussion on the inscription and bibliography, see Olmstead, History of the Persian Empire, pp. 116-18.

19On this period see Cross, “Papyri of the 4th Century B.C. from Dâliyeh,” New Directions in Biblical Archaeology, ed., Freedman and Greenfield, and Cross, “A reconstruction of the Judean Restoration,” JBL 94 (1975) 4-18.