From the series: Ecclesiastes PREVIOUS PAGE | NEXT PAGE

2. Life Under the Sun

Ecclesiastes in Light of Genesis and Romans 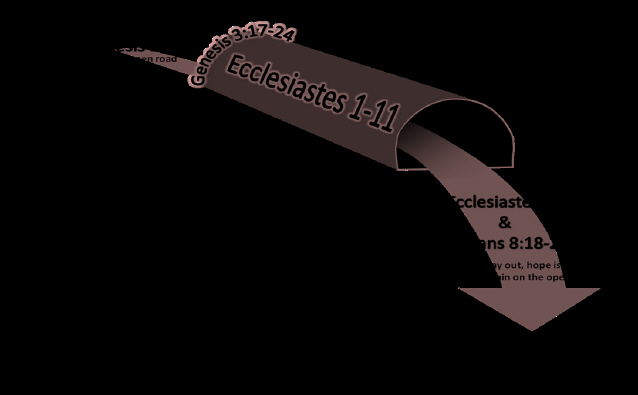 Hope lost in the garden

When man was driven from the garden, access to the tree of life was taken away. In essence hope for a fulfilling life was lost. We will shortly see in Romans how the whole of creation looks forward to once again the freedom it enjoyed.

The futility of life outside of the garden

Ecclesiastes is a view of life separate from God. The futility that began in Genesis 3 and is spoken of in Romans 8 is magnified in Ecclesiastes. What would life look like if we were left in that futility? Ecclesiastes is the answer to that question. While there are hints spread throughout the book and a clear statement of focus in the conclusion, the rest of the book views life without hope.

The hope found amidst the futility

The hope is found in Christ. Further in the passage in Romans it is clear that Christ is the hope offered to a society plagued by futility.

This understanding of Genesis and Romans leads us into the first section of Ecclesiastes and its theme . . .

The problem is that life is Hebel.

Vapor, breath, vanity . . . The noun appears seventy-one times in the OT. Thirty-six times it is used in Ecclesiastes, where it occurs at least once in each of the twelve chapters except chapter ten.

Isa 57:13 When you cry out for help, let your idols help you! The wind blows them all away, a breeze carries them away. But the one who looks to me for help will inherit the land and will have access to my holy mountain.”

Pro 21:6 Making a fortune by a lying tongue is like a vapor driven back and forth; they seek death.

The first of the three meanings of hebel carries the idea of being brief or short. In these instances, the word is not so much speaking to the worthlessness of the activity as much as it is to the length of the activity. Often Ecclesiastes looks at life or a pursuit as simply being so short that it is like a breath.

Ecc 3:19 For the fate of humans and the fate of animals are the same: As one dies, so dies the other; both have the same breath. There is no advantage for humans over animals, for both are fleeting.

Ecc 6:12 For no one knows what is best for a person during his life – during the few days of his fleeting life – for they pass away like a shadow. Nor can anyone tell him what the future will hold for him on earth.

Ecc 11:10 Banish emotional stress from your mind. and put away pain from your body; for youth and the prime of life are fleeting.

Jas 4:14 You do not know about tomorrow. What is your life like? For you are a puff of smoke that appears for a short time and then vanishes.

Ecc 2:15 So I thought to myself, “The fate of the fool will happen even to me! Then what did I gain by becoming so excessively wise?” So I lamented to myself, “The benefits of wisdom are ultimately meaningless!”

Consider your job . . . Why are you, diligent as you are, treated in the same fashion as the sluggard that works next to you? Why is your raise the same or even less than someone else’s? Why does the other guy get the promotion? Why does the other guy get the job, and you don’t? Do you ever feel like there might be injustice in your business setting? Have you ever asked yourself, “What’s the point in trying so hard?” This is the vanity of which Solomon speaks. Righteousness and justice do not necessarily seem to be on the side of the wise, moral and diligent.

This final nuance to the word hebel is slight from the meaning of ‘absurd.’ This meaning takes a look at the individual who was able to ‘succeed’, but even in his success there is no satisfaction. This could also be the result of the absurd. Because life is often absurd, life seems to be unfulfilling.

“When the teacher says that pleasure is a hebel and accomplishes nothing (2:1-2), he does not mean that pleasures are strictly absurd or even primarily that they are fleeting. Rather, he means that they are a waste of time in that they fail to satisfy.” 1

Ecc 4:4 Then I considered all the skillful work that is done: Surely it is nothing more than competition between one person and another. This also is profitless – like chasing the wind.

Ecc 4:8 A man who is all alone with no companion, he has no children nor siblings; yet there is no end to all his toil, and he is never satisfied with riches. He laments, “For whom am I toiling and depriving myself of pleasure?” This also is futile and a burdensome task!

The problem is magnified . . .

The problem is that life in light of Ecclesiastes is futile, brief and meaningless. At times we may tend to think that we might be able to overcome the meaningless of Solomon’s life. We are, of course, more technologically advanced and have had the benefit of new and improved ideas.

By the futility of creation.

Ecc 1:3 What benefit do people get from all the effort which they expend on earth?

Psa 90:10 The days of our lives add up to seventy years, or eighty, if one is especially strong. But even one’s best years are marred by trouble (work) and oppression. Yes, they pass quickly and we fly away.

The root of this word “relates to the dark side of labor, the grievous and unfulfilling aspect of work. A biblical view of labor based on this word alone would be defective, but this aspect of work should be included in a full induction. Thus Moses uses this term to describe the frustration and struggle of the worker in this ephemeral, transitory world (Psa 90:10). No wonder he cries out to the eternal God “and let thy beauty (eternal, lovely work) be upon us” (v. 17). The root in its several forms is used especially by Solomon in Ecclesiastes as he details the frustration, profitlessness, and transitory (hebel) benefits of day-by-day labor; such is noted when that labor is not seen as service (even worship!) to God, but simply as work done “under the sun.” For the man whose relationship to God is tenuous, there is no profit from all his work (Eccl 1:3). Yet even in Ecclesiastes there are glimpses of a higher view of labor: “every one who eats and drinks and sees good in all his labor-it is the gift of God” (Eccl 3:13; cf. Eccl 5:18-19).2

As was just stated, ‘work’ carries a negative connotation in this context and this context views work as done ‘under the sun’ instead of as worship or service to God.

Some have seen below a parallel to the four classical Grecian elements (fire, earth, air, and water).

Ecc. 1:3b which they expend on earth?

1:4 A generation comes and a generation goes, but the earth remains the same through the ages.

1:5 The sun rises and the sun sets; it hurries away to a place from which it rises again.

1:6 The wind goes to the south and circles around to the north; round and round the wind goes and on its rounds it returns.

While creation continues unencumbered by the concerns of humanity, the elements themselves are cyclical and seemingly futile.

The primary purpose of these verses is to show the similarities between a hedonistic view of life and work and the cyclical, seemingly mundane actions of creation.

By the inability of humanity.

Ecc 1:8 All this monotony is tiresome; no one can bear to describe it: The eye is never satisfied with seeing, nor is the ear ever content with hearing. 1:9 What exists now is what will be, and what has been done is what will be done; there is nothing truly new on earth. 1:10 Is there anything about which someone can say, “Look at this! It is new!”? It was already done long ago, before our time. 1:11 No one remembers the former events, nor will anyone remember the events that are yet to happen; they will not be remembered by the future generations.

This is the problem and there is nothing you can do about it . . .

Not only is the vanity of life magnified by creation, it is as well magnified by the fact that we will find no new avenues of purpose and satisfaction. “There is nothing truly new on the earth.” Just in case you think our technologically advanced society might be able to come up with new ways to satisfy man that would have been foreign to the Ancient Near East, the simple fact is that there are no new novel ideas.

Our error is that once we have heard from Solomon, we think, “maybe I can do it better than Solomon. Maybe Solomon didn’t find all the potential places of satisfaction in this world. I’ll keep trying . . .”

Far from being a contradiction to the gospel, Ecclesiastes is a call for the gospel. The world has no hope of finding lasting satisfaction or an explanation for the hopelessness in which they find themselves. It is only in Christ that true hope can be found and satisfaction be realized.

2 Theological Wordbook of the Old Testament

From the series: Ecclesiastes PREVIOUS PAGE | NEXT PAGE